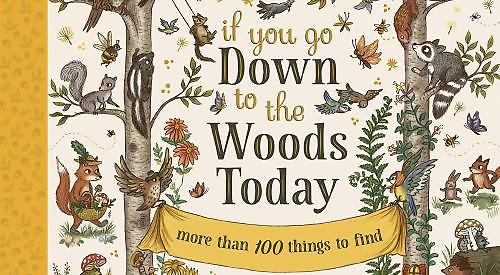 A POET and author who grew up in Crowsley and Binfield Heath has published her first picture book for children.

Rachel Piercey’s If You Go Down to the Woods Today is a journey through the seasons of a magical woodland landscape with 16 poems to read and more than 100 things to find.

With sumptuous full-colour illustrations by Freya Hartas, the 40-page hardback was published last week and has met with glowing reviews.

The Daily Telegraph called it “a simple yet magical first book of poetry, following a friendly woodland bear on his journey through the changing seasons” while Kirkus Reviews called it “a tour de force of interactive two-dimensional nature”.

For Rachel, 33, who attended Shiplake Primary School and Kendrick School in Reading before studying English literature at St Hugh’s College, Oxford, the book contains a number of autobiographical elements.

She says: “I suppose I’ve drawn on the things that I particularly enjoyed as a young person. Probably my favourite spread in the book is called Putting on a Play. It’s set on a midsummer evening and it’s all the animals putting on a production of A Midsummer Night’s Dream.

“I’ve got very happy memories of going to the Rising Sun at Witheridge Hill, which used to do plays in the pub garden, and my parents would take me and my sister.

“They’d do Shakespeare plays and I just remember I was too young to fully understand the language or the sort of intricacies of the plot, but I just loved the atmosphere. And everyone would sit on hay bales, which was obviously highly thrilling to a child.

“It was so magical, so atmospheric, and I actually remember that there was a review in the Henley Standard of one of the plays that mentioned me and my sister, not by name, but just mentioned that we were there laughing away in the audience.

“Because we would find things funny even though we didn’t understand the language because it was just such a captivating atmosphere.”

Understanding the language is something Rachel has since dedicated her life to in one way or another. While a student she served as president of the Oxford University Poetry Society and in 2008, her final year, she won the Newdigate Prize for poetry.

After graduating, Rachel went to work for Duncan Petersen Publishing, where she co-authored a book of walks around Rome.

Then in 2013 she published her first collection of 12 poems, The Flower and the Plough, which she wrote while studying for a master’s degree in creative writing at Royal Holloway university.

She then went to work for the Poetry Society in Covent Garden, where she spent three years in the education department.

Soon afterwards she started collaborating with Emma Wright, a friend from her days at Kendrick School, who had set up her own independent publishing house, the Emma Press.

Together, the pair co-edited three children’s poetry anthologies, an experience that Rachel says ignited her love of writing for children.

“I think when it’s done well it covers all the sort of emotional breadth and depth of adult literature but in a very entertaining, accessible way. It’s a lovely space to be in.”

In 2015, the publication of one of the children’s anthologies took Rachel into schools — an experience that was to influence her subsequent work as a poet.

“Emma applied for Arts Council England funding to take a kind of tour around the country with the book,” recalls Rachel.

“So we went all around the country to schools and libraries and community spaces to deliver workshops and readings.

“I just loved doing that so much. So from then on I’ve been going into primary schools and doing readings in assembly and then workshops with classes.

“It’s one of my favourite things to do, it is so exhilarating. It’s really rewarding to work with young people. All children are amazing poets — they’ve got that lack of inhibition.

“And it’s great for me as well because I can sort of try out material on exactly the right audience.”

Sadly, while the nation’s schools have recently re-opened, Rachel doesn’t yet have any classroom visits in the diary to coincide with the publication of If You Go Down to the Woods Today.

Though they haven’t yet been able to meet in person, she and Freya hope to be able to do some author and illustrator events once lockdown has lifted fully.

Reflecting on her own childhood in the Henley area, she says: “The beautiful countryside and walking in the woods and fields, having that sense of nature being on my doorstep, definitely seeded that love of nature early.

“It’s something that I’m really keen to talk about with children. Getting out in nature is something I just find so helpful. You can go out into even quite a small green space and there’s just so much to look at and notice.

“I think that’s what this book promotes is that sort of noticing loads of small details. It’s a really rewarding activity.”

• If You Go Down to the Woods Today is published by Magic Cat Publishing, priced £14.99.