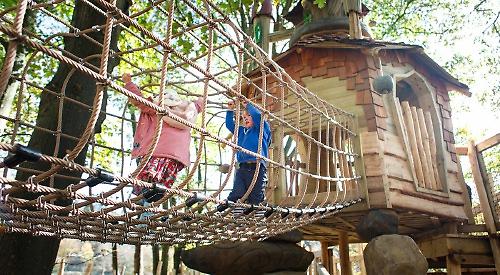 THE first in a planned series of children’s books telling the mythical story behind the new children’s adventure playground at Stonor Park is published today (Friday).

The Legend of Tumblestone Hollow is the work of children’s author Amy Sparkes and illustrator Steve Pearce.

Steve, 69, who lives in Cornwall, was initially recruited by Norwich-based Capco, the builders of the £250,000 attraction, to assist with its theming and design.

He said: “I’m not actually a book illustrator as such. I design theme parks, adventure playgrounds, rides — that’s my world.

“I first heard from Simon Egan, the managing director of Capco, in mid-January last year and went to meet the Stonor family to have a look at the place and start to come up with ideas.

“I’ve helped Capco with the characterisation of the place and the fancy bits, if you like.”

As the name suggests, the theme of the new Tumblestone Hollow attraction is derived from the Neolithic stone circle that gives Stonor its name.

The idea for a children’s book came from the Hon William Stonor, the heir to the estate, and his wife Ailsa.

Lady Ailsa said: “It was incredibly important to us that our wonderful new playground had a narrative that anchors it to Stonor. The ancient standing stones have been here long before the house and parkland.

“William and I felt a children’s book which is full of adventure and magic would bring life to the playground. We had wonderful fun thinking about all the characters who might live there and how they came to be there.”

As work on the playground progressed over the course of last year, Steve worked to bring the characters to life before Amy was commissioned by the Stonors to write the first set of stories.

The Legend of Tumblestone Hollow is a picture and rhyming story book based around a character called Obsidian who saves a set of magical stones from harmful shadows before planting them, hidden from view, by an ancient field maple tree in the valley of Stonor Park.

For Amy, 42, who is the author of more than 20 books for children of all ages, the project has proved something of a first.

She said: “I’ve done things on a smaller scale like working for reading schemes and working to a brief for that kind of thing, but this is the first time I’ve been involved in something anywhere near on this scale.”

A mother of six, Amy lives with her family in Tiverton, Devon, and enjoys visiting National Trust properties, forests and moorlands such as the nearby Dartmoor National Park.

She said: “One of the reasons I was so keen to get involved with this project is because the idea of mixing storytelling and play is very much what we do as a family.

“When we take the kids out to places they will make up a story based on the place they happen to be in and that will be their imaginative game.”

Because of the coronavirus lockdown, one place that Amy and her family haven’t yet been able to visit is Stonor itself. But as she starts work on the second book in the Tumblestone Hollow series, that is something she hopes to rectify later this year.

She said: “There’s something very special about this world — it just feels like it’s so big and so exciting, that there’s so much to explore. So we definitely have a second book, which will be coming out hopefully in late summer or early autumn.”

Lady Ailsa added: “It was very exciting seeing Steve create the characters to inspire Amy’s story. We are delighted the book is now on sale and hope it inspires the wonderful creative play at Tumblestone Hollow that it is designed for.”