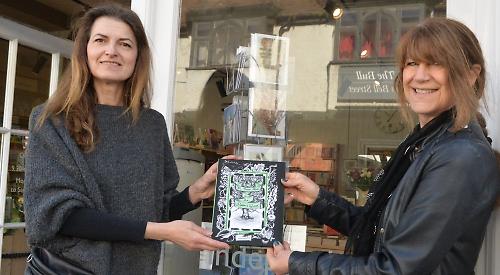 TWO former New Street neighbours have produced an illustrated adventure story that draws on their shared love of British myths and legends.

The Green Man and the Raven’s Quest is the work of writer Sarah Bell and artist Nicola Sutherland, who are collectively known as “Sutherland Bell”.

The lavishly illustrated 86-page book was published last week in hardback and paperback and copies are currently on display in the window of the Bell Bookshop.

The shop is just around the corner from the Kenton Theatre, close to where Nicola used to live.

She says: “I live near Henley Bridge now but Sarah and I lived opposite each other on New Street for 12 years. That’s how we met. We could literally see into each other’s houses and our children all played together and grew up together. We’ve known each other for 20 years now.”

Sarah, who still lives in New Street, is a trustee of both the Kenton Theatre and Henley’s Acorn Music Theatre Company.

Two years ago she was asked by Acorn’s artistic director Gail Rosier to contribute some dialogue to the group’s summer production, titled The Green Man and Other Fables.

“She said ‘Go write a Green Man speech for me, Sarah — and go full Beowulf.’ So I did. I went and sat on an island in the middle of the Thames and sat there in silence listening to the trees.

“It was spring, so that’s how I wrote that. And I came back and Gail said ‘This is poetry, Sarah.’ ”

While Sarah had contributed to previous Acorn productions, she says her creativity was given fresh impetus following the death of her father in 2018.

“Something breaks inside you and it just came out,” she says.

Sarah was further encouraged by the theatrical success of The Green Man and Other Fables.

Following the production’s initial June run at White Pond Farm in Stonor, it was staged at the pop-up Rose Theatre at Blenheim Palace two months later.

“I had already started putting some poems together,” says Sarah. “But after the Acorn production Gail said ‘You need to go and get these published, Sarah. They’re really good.’

“And I just said to her ‘I haven’t got enough to publish.’ So I went away and started writing.

“I didn’t want to write the same story as what we had already done, I wanted to write a slightly different story. But without Gail’s encouragement the The Green Man and the Raven’s Quest would not have been written.”

As Sarah and Nicola tell it, the book weaves two parallel stories together — a grail quest inspired by Arthurian legend and a race against time to save the natural world from impending doom.

Determined to save her dying father, a young girl sets out to find the elixir of everlasting life.

The Green Man watches her perilous journey as he laments the widespread destruction of nature.

Both are in a race against time, but will they be able to stop Death’s relentless stride before it is too late?

“It’s really an adventure story,” says Nicola, who has previously had some of her artwork published in book form.

“I did some illustrations for a few other books a long time ago when I was in my twenties,” she says. “They were fashion illustrations, but this is the first thing since then.”

The book is the first Sarah has had published but not the first she has written.

“I’ve a couple of novels which are still in bottom of my drawer,” she laughs. “But one of them had magical creatures in, so this was right up my street. I was in my element because it’s the kind of thing I love.

“My grandmother was really into folk stories and legends and fables. Half of them I didn’t think were true but she told me stories at a very early age about the myths and legends of Britain.”

“Doing this book brought together lots of things that we’re both interested in,” she says. “Part of it is set in Cornwall, where Sarah is from originally, and the funny thing is that during lockdown I discovered that my ancestors on my mother’s side are all from there.”

Sarah, who subsequently grew up in Ruscombe and attended the Piggott School in Wargrave, says: “I haven’t got Cornish roots so much as I was born there and lived there for the first five or six years of my life — in a village called Gweek.

“There’s a poem about it in the book because it made a massive impression on me.

“The only reason people know of it is because there’s a seal sanctuary there, exactly behind where we lived.

“We lived right on the Helford River where there are these oak trees which are called the sessile oaks, the Cornish oaks.

“They line the riverbanks and they’re quite high — or they seemed so when I was a child.

“And then when the tide went out the smell of the mud has always stayed with me — this kind of salty, slimy mud which you couldn’t walk out on to, you’d just sink into it.

“But it had all these little gullies, so when the tide started coming back in you could hear this noise as it came trickling through. And my bedroom looked right out on all this.”

For that reason, says Nicola, it had to be included in the book.

“This is how Sarah would describe things to me and I would be drawing it. She’d be describing something mulchy or whatever and I’d be saying ‘Well, how mulchy? Is it really dripping? What’s it like?’

“And she’d say ‘Hang on, I’ll just read a bit from this one and then you’ll know what I’m talking about.’ And I would be drawing it while she was talking — and that’s how it all happened.

“Sarah would say ‘Nic, I need an illustration of a wolf and the Raven Queen. So there were a couple of ideas that I was sketching out and then she’d say ‘Oh, and I’ve got this poem about a selkie, an evil mermaid. Could you draw that? Oh, and I need a fern.’ And gradually we just started putting illustrations on every single page.”

Recommended for ages 10 and up, The Green Man and the Raven’s Quest is priced £12.99 in paperback and £22.99 in hardback. For more information, visit www.tslbooks.uk