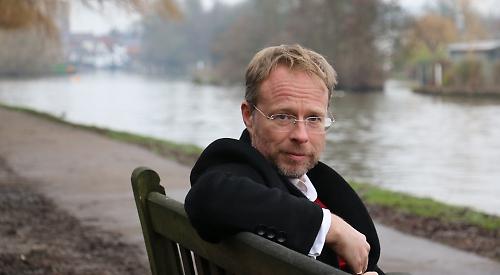 AN author from Henley has used the town as inspiration for his latest teen novel.

Robin Bennett’s fascination with magical realism led to the release of Buk, a story about a girl called Nancy who starts to see the world as a fantasy after having real-life struggles.

Some of the stories that feed into the novel were mapped out when Mr Bennett was in his late teens.

Now 52, he has used Henley to do a modern re-imagining of Alice in Wonderland.

Mr Bennett, who lives in Queen Street, said: “My editor said it was better not to stick to just one place but I don’t think that’s true. I’ve gone out on a bit of a limb with this book by basing it in Henley but I’m very attached to the town and the river, having grown up here.

“I also think it has to do with the fact that there is an awful lot of fantasy and magical literature that is inspired by the river, such as The Wind in the Willows. It is a book that I more or less mapped out when I was 18 or 19. It has been knocking around in one form or another for a very long time. I went to boarding school at Oratory Prep. I sleepwalked a lot when I was younger and when I woke up I found myself in parts of the school I shouldn’t have been in.

“The tone of the book is set with that feeling of waking up when you’ve just had a really vivid dream and you can’t work out where you are. That is something I definitely wanted to get across.”

An audio version of Buk was released in 2013, narrated by actress Imogen Stubbs. At the time, Mr Bennett felt it would be better in this format rather than in print.

But this week it was released as a paperback to coincide with the 150th anniversary of the Lewis Carroll classic.

In Buk, Nancy’s mother is having a baby but this makes her ill. Her father is angry because they can’t afford the baby and Nancy becomes angry with everyone. The 13-year-old meets a boy called Buk, who helps her to accept the world for what it is.

Mr Bennett said: “Nancy is at that age where she is not quite a child but not quite a teenager. Her parents are not getting on and that triggers a series of regressions and dream sequences and you try to work out if what you are reading is real or not real.

“It is a journey through a series of events that she knows can’t be real but feel real to her.

“This is very much a story of hope. Nancy gets through her troubles largely by using her own gifts and inner strength and does everything with determination. She doesn’t like Buk very much to start with but he does help her and she helps him as well. It takes her a very long time to realise how helpful he is.”

There are lots of local references, with the opening sequence taking place in Hart Street. The river, Fairmile Cemetery, the bandstand in Mill Meadows and Damer Gardens also feature. Mr Bennett’s great aunt, Hilda Harding, lived in Lower Shiplake and he grew up locally before his family moved to France due to his father’s work commitments.

After returning to the UK in the Nineties, he founded the Bennett Group, which includes Aktuel Translations, a global translation company.

He returned to Henley when he was 35 and lives with his wife Helene, a translator. They have three children, Jude, 16,
Victor, 15 and Hortense, 12.

In 2010, he released Start-Up Smart, which offered advice on how to start a new business on a budget. He came to realise that he much preferred writing for younger audiences and since then has released more than 20 works of fiction and picture books.

Mr Bennett said: “I started off for the teen market and after that I gradually started going down through the age groups.

“This is probably the book that has had the least number of re-writes and drafts. This one does feel special and it’s a bit of a turning point for me. It’s going to be the first in a series of books called The Quartet for young adults. They are going to be set quite firmly in Britain and are all going to be a little bit eccentric and quirky. The next one will be about the Iron Age.

“I really enjoy fantasy writing. I spent so much of my life as a businessman and for me it provides a form of escapism. I think everyone needs that from somewhere. I also think that if fantasy is done in the right way, it can be used to shine a light on issues in real life.”

The first of his Small Vampires books was released in 2011 and his other titles have included The Angel of Mons, The Hairy Hand and Space Dragons.

Earlier this year, Mr Bennett had Monster Max and the Bobble Hat of Forgetting published by Firefly Press. It is the first in a projected five-book series. Max, a nine-year-old boy, has an unusual superpower that turns him into a huge dustbin-eating monster whenever he burps.

• Buk is published by Monster Books and is available to buy online at bit.ly/3xisusJ