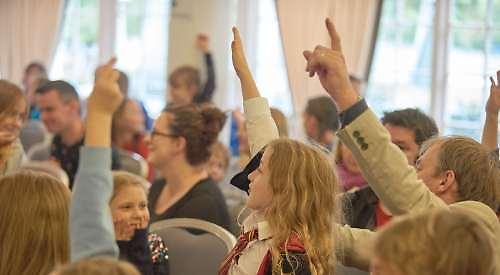 From its beginnings as a weekend of talks in 2007 to being established as one of the UK’s biggest book events, Henley Literary Festival has grown dramatically. As it prepares to return to the town in-person next week after going online in 2020, TOM RYAN has put together 15 things to try at the 15th festival.

1. Laugh along with the funniest festival yet

With comedians having limited chances to entertain live audiences over the last 18 months, they are heading to Henley in force. Stand-ups Tom Allen, Jack Dee and Rob Beckett all appear, as do TV stars turned authors Ruth Jones, Mel Giedroyc and Peep Show stars Robert Webb and Isy Suttie.

2. Plot your own writing journey

The whole week offers unique chances to hear from writers, but a couple of events specifically target aspiring authors. For children aged 10 and up October, October author Katya Balen is offering a writing workshop on October 3 at the River & Rowing Museum, while adults can join leading local novelists Rachel Edwards and Susanna Beard for How To Be An Author on October 7.

3. See stars of The Sopranos, Hamilton and Harry Potter

It’s not every English town that gets visited by cast members of three of this century’s biggest global cultural phenomena in one week. But it’s happening here in Henley — and all at the Christ Church Centre.

Stevie Van Zandt has not only been part of Bruce Springsteen’s E Street Band for 50 hit-filled years; he played Tony’s consigliere Silvio in The Sopranos and now he makes his literary festival debut.

Actor and activist Evanna Lynch made her screen debut in 2007’s Harry Potter and The Order of the Phoenix as Luna Lovegood and starred in the next three blockbusters. She joins Otegha Uwagbaand Annie Ridout for the panel discussion Talking To My Teenage Self.

National Theatre regular Giles Terera won the Olivier for best actor in 2018 for playing Aaron Burr in the original West End cast of Hamilton, an experience he will be discussing on Friday, October 8.

Debut novelists speaking this year include Naomi Ishiguro, Neema Shah, Cathy Rentzenbrink and Sara Jafari. On the non-fiction side a podcasting panel on October 3 sees Alonement host Francesca Spector, Time To Talk’s Alex Holmes and But Why? presenter Clemmie Telford reveal how their shows became books.

5. Watch online from wherever you are

From toddlers to teens, the literary festival has plenty for children of all ages. Little ones will love Elmer, The Rapping Princess and The Pirate Mums storytellings, while primary and secondary school children can hear from Clare Balding, Stuart Lawrence in conversation with Paul Greengrass, former children’s laureate Chris Riddell, Kate Pankhurst and many more.

Selected as this year’s Family Prom at the Royal Albert Hall, War Horse author Michael Morpurgo is joined by cellist Clare O’Connell and Horrible Histories actor Natalie Walter for a magical morning of music, storytelling and poetry with Carnival of the Animals.

9. Join those who entertained us in lockdown

The nation’s gym teacher Joe Wicks, #DrawWithRob illustrator Rob Biddulph and Kitchen Disco singer Sophie Ellis-Bextor cheered up millions when we couldn’t meet up — and now they are each coming to the festival.

When John Grisham joined online from the US last autumn he set the record for most books sold; he has now been eclipsed by 2021 author Jeffrey Archer, whose international sales are over 275 million.

This year the festival hosts two proof parties, where after the event all attendees get a copy of the books — Meredith Alone by Claire Alexander and Lessons in Chemistry by Bonnie Garmus — that won’t be published until next year.

The Green Man and the Raven’s Quest has been all over Henley this year, from the Bell Bookshop window and a sell-out Red Lion lawn reading to the large mural on the approach to Henley Bridge — now Sarah Bell and Nicola Sutherland will read, draw and discuss at the River & Rowing Museum.

Many restaurants, cafes, pubs and shops report literary festival week as their busiest of the year and despite the tough times there are more than ever to visit in between the talks.

14. Get briefed by politicians past and present

15. Have a right royal encounter

As a late addition to the line-up, Sarah Ferguson, Duchess of York, will be in conversation about her Mills & Boon bestseller Her Heart for a Compass, a story about a strong-willed redhead who rebels against a society where women are expected to conform.

• For more information, including the full programme of events, visit www.henleyliteraryfestival.co.uk