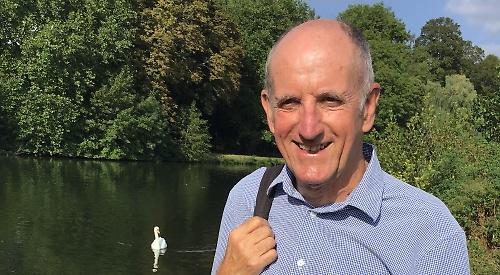 THE author of two popular books of family-friendly country walks has produced a new volume focusing on the River Thames.

John Prior, 70, is a retired Met Office climatologist who has lived with his family in Pangbourne for more than 40 years.

His first book, Weekend Walks West of Reading, was published in 2014 and is still in print, having been updated in 2017.

Its success inspired Weekend Walks South of Oxford, which came out in 2018 and featured 12 short circular walks within the triangle formed by Henley, Wantage and Oxford.

Each walk includes places of interest and a café, pub or shop, and most also pass a children’s playground.

The starting points have been chosen for easy parking and access by public transport.

Information is given about the route to follow and sights along the way, with each walk being illustrated by a map and colour photographs.

Mr Prior, who has five grandchildren, said that having more time on his hands during the coronavirus lockdowns had prompted him to start researching and writing the book.

This time around he was also inspired by the literature of the River Thames, including Kenneth Grahame’s The Wind in the Willows and Three Men in a Boat by Jerome K Jerome.

He said: “Wherever I could, I’ve included quotes from those two books — which I enjoyed doing, actually.

“Quite often it was possible to find a reference to a place in, say, Three Men in a Boat, so I popped those quotes in for each walk just to give a little bit more interest. I’ve got that theme running through each walk, actually. Nearly every walk has quotes relevant to it.”

Each of the 12 walks in the 42-page book is also accompanied by a “facts and figures” box giving added detail about the various landmarks and places of interest along the way. Mr Prior said: “I had some riverside walks in my other books, so these are new ones that sort of fill in the gaps, along with things that I hadn’t covered previously.

“It also stretches the area I was covering towards the east of Reading, so it was interesting for me to discover the history and the information about places like Hurley and Cookham. They’re not places we’ve frequently visited but it was interesting to research them.”

Despite both being keen walkers, Mr Prior says he and his wife Anne are not members of any of the local ramblers’ groups.

“No, we’re not, actually. I mean, the difference with the walks in the books is that they are aimed at families, so they are relatively short and probably most members of ramblers’ groups would prefer five, six or more miles.

“We don’t manage quite that far these days – that’s probably the main reason we haven’t joined.”

One difference from his previous books that Mr Prior has allowed himself is that this time around some of the walks are slightly longer.

He said: “I started off with this criterion of two miles maximum, which was okay – it just about worked but it did stop one or two interesting walks I could have done, so for the new one I stretched it out to three, which helped.”

Weekend Walks by the Thames is now available in the Bell Bookshop in Henley, priced £5.95.

Mr Prior said that having been inspired to start writing it during lockdown, the events of the past year have also helped his sales.

He said: “I’ve been lucky enough to get various bookshops across the Thames Valley interested in stocking it. The restrictions on foreign travel have encouraged a shift — bookshops are telling me they’re not selling many overseas books but they’re selling a lot of UK travel books, including the ones for the local area.”