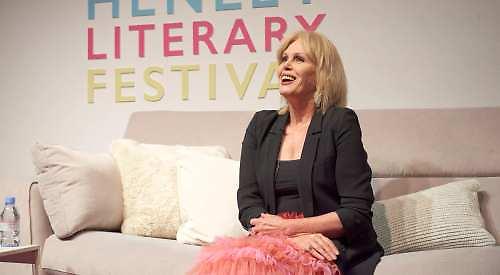 JOANNA LUMLEY spoke about her admiration for the “gorgeous, fantastic” Queen during a talk in Henley.

The actress was speaking at an extra event organised by the Henley Literary Festival, which took place last month, at Christ Church in Reading Road on Thursday evening.

She was promoting her new book, A Queen for All Seasons, which is subtitled “A celebration of Queen Elizabeth II on her platinum jubilee”.

Everyone who had bought a ticket for the sold-out event received a free copy of the book. The audience included Dame Mary Berry, who was in the front row.

Lumley, 75, sat on a large beige sofa for the question and answer session, which was moderated by Good Housekeeping editor-in-chief Gaby Huddart.

She wore the ruffled skirt in which she appears on the cover of the December edition of the magazine but not the red woollen polo neck jumper to avoid being too hot in the church.

The book brings together accounts from different people who have met the Queen and includes the story of her involvement in the James Bond sketch filmed for the 2012 Olympics Games in London.

Lumley said: “It’s an insight into the Queen from a thousand different eyes.

“We don’t really know her because she has never done an interview but different people have seen little bits of her.

“If you put all this together you have got a little bit more of an idea of what Her Majesty is really like.”

The book has chapters on the Queen on tour, on meeting celebrities and at home.

Lumley said: “It was my job to sort it all out. It’s a piece of putty you have in your hands.

“When I started I thought, ‘How long can it take to assemble a book of about 80,000 words, a lot of which weren’t mine?’ Turns out it takes ages!

“I started with the coronation and all that but then after that it all goes a bit quiet and I realised if I followed in a linear way it gets boring so I thought doing it in clumps would be better.” Lumley recalled what she was doing when the Queen ascended to the throne in 1952.

“Most of us remember it, don’t we?” she said. “I was out in Malaya, what is now Malaysia, at seven years old. My father was serving with the Gurkhas during the emergency. It’s 70 years ago, just extraordinary.

“People here, some people won’t know a time without the Queen. And she’s still here, still gorgeous and still fantastic.”

She asked the audience how many of them had met or seen the Queen themselves and about a quarter raised their hands.

Speaking of her own experiences of meeting the Queen, Lumley said she had been so nervous when she received an OBE that she had no memory of the occasion.

But she added: “I’d been in her presence before in line-ups. You’re normally put together with similar people, so I’m with a group of actresses. The Queen will come over and say ‘hello’ and there’ll be people she knows like Penelope Keith and people she might not know, like me.”

Lumley also spoke of the Queen’s empathy with people.

She said: “There’s a story in the book where the Queen is talking to a soldier who fought in Aleppo. This man starts to get upset and the Queen noticed at once that he couldn’t talk about it, so she said, ‘Shall we feed the dogs?’

“She rang the bell and the corgis ran in and they bent down and fed them biscuits. And at the end of it she said, ‘There, that was better than talking, wasn’t it?’

“Isn’t that amazing? The Queen has a sixth sense. Animals understand that. They all rush to greet her — they respond to her with affection.”

Asked what surprised her about the Queen, the actress replied: “She’s so practical. She lives in a very frugal way and has a sense that she must live in a certain way. There’s a story in the book where she bends down and lights a fire for herself, which of course she can do as she’s a Girl Guide.

“It’s nice to know the Queen can make a good fire.”

The back cover of the book has a quote from the Queen from her 21st birthday: “I declare before you all that my whole life, whether it be long or short, shall be devoted to your service.”

“All of us have had things in life we’ve had to give up on but she has never backed down from anything. How do you get to be such a dedicated person?

“I hope I won’t offend her by saying this, but I think she made that vow and then she became that person, she made herself that person. We’re sitting here now, a group of humans, but she made herself not the same as us by doing what she has always done and never letting up.

“It was like when lightning strikes the desert, which does happen sometimes, and the sand turns to glass. When she was eight years old and Edward VIII abdicated, that’s when lightning struck and she became glass, different from us sand people.”

Asked if she had sent a copy of the book to the Queen, she said: “Of course I did — it’s her book. It’s a bouquet of flowers from all of us to her.”

Talking about her own career, Lumley drew a round of applause when she said the highlight was playing Patsy Stone in Absolutely Fabulous.

“That’s what you have to do. Acting’s about observing people, so you’ve got to stay grounded.”

At this point an audience member whispered “like the Queen”.

Lumley said that for the Queen’s jubilee celebrations next year she would like to have a small medal with a photo of Her Majesty on it, like she had for the coronation in 1953 when she was a little girl.

She also said that she was looking forward to the street parties.

“In London, where I live, they’ve sealed off so many roads for cycling and things like that, we could practically have a street party tonight,” she joked.

After her performance, Lumley did not stay to sign copies of her book for the audience who were told she needed to get back to London.