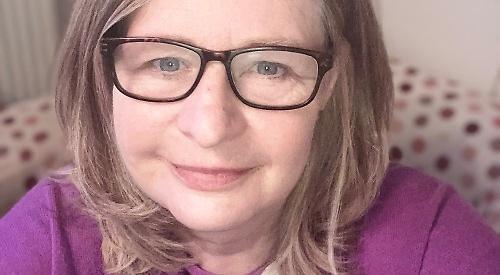 THE author of a book about three young women who become best friends while working at the Army Post Office’s sprawling home depot sorting office during the First World War has penned a Christmas sequel.

Writing under the name Poppy Cooper, Kirsten Hesketh’s The Post Office Girls was published in May and was praised by readers and critics.

Fellow author Maisie Thomas called it “a sparkling debut”, adding: “This coming-of-age story has an endearing heroine and an absorbing plot.”

The year is 1915 and after the recent dramatic events at the home depot in Regent’s Park, Milly Woods is looking forward to spending as much time as possible with her friends Liza and Nora.

But when she is moved to a different department, she and the girls struggle to find time to spend together.

Instead, Milly finds company and common ground at her local suffragette group, as well as catching the eye of a wounded
ex-soldier at the home depot.

Soon Milly learns that her new friends might not be all they seem. As she is drawn into a deadly plot that could affect the outcome of the war, can Liza and Nora help her scupper it in time for Christmas?

Kirsten, who lives in Greys Hill, Henley, made her publishing debut last year under her own name with Another Us, a romantic novel set in Hambley, a fictional town not unlike her own.

The book told the story of a couple whose ailing marriage comes under further strain when their young son is diagnosed with autism.

A second Hambley book is in the works, but for now Kirsten’s focus is very much on Milly, Liza and Nora.

She says: “I wrote the first book from the point of view of Beth, who was quite middle class and comes from a village in Hertfordshire.

“With A Post Office Christmas, which carries on directly from where the first book finishes, Beth is still around but it is told from the point of view of Milly — and Milly’s from the East End.”

One of her sources was previous research into her family tree.

She says: “For Milly, I’ve drawn on my grandmother on my mum’s side. She was actually born in Bow or Whitechapel in 1903, so she was a little bit younger than the girls I’ve written about.

“Her name was Marie Wildermuth and I’ve used the name ‘Wildermuth’ in the book because there were lots of German-sounding names of people living in the East End.

“Marie’s dad was Gustav Wildermuth and either him or his grandfather had come over from Germany and set up a bakery on Brick Lane.

“There were a lot of German immigrants who had come over 50 years before the First World War so they were kind of naturalised. My grandmother was born in the UK but that surname was a problem.”

One puzzle from the past that Kirsten encountered was that while Brick Lane at the time was a predominantly Jewish area, her grandmother’s family was Catholic.

“We’ve wondered about that,” she says. “I’ve researched our family tree and it’s completely Jewish, that area.

“The Germans would come over and often they were, you know, escaping from Germany.

“They were being persecuted or there were no opportunities whatsoever, so they came here. We’ve got other relatives who did end up in the States but my branch ended up in the East End.

“Marie wasn’t old enough to work during the First World War but she remembered it because she was a teenager and the family had to change their name to Wildsmith, which is kind of the anglicised version of Wildermuth.

“They changed it because Wildermuth sounded very German and suddenly if your surname was German you would not want that to be known.

“When the Zeppelin attacks came over suddenly anyone living in the East End with a German name was having bricks put through their windows, so they almost had to go into hiding.”

As Kirsten notes, the Wildermuths were in good company, with the British royal family in 1917 becoming known by the surname Windsor in preference to Saxe-Coburg-Gotha.

“I haven’t been very original in the book,” says Kirsten. “Milly doesn’t have a German surname — she’s Milly Woods — but Milly’s family has got a lodger called Mr Wildermuth where I’ve tried to explore some of the tensions of having a German-sounding name and living in the East End at that time. So, yes, I’ve drawn on Granny. She’s’s the inspiration for that.”

Following the publication of The Post Office Girls in May, Kirsten found herself with just two months to finish writing its sequel.

But was it more difficult to write a Christmas book in early summer?

“Do you know, it was really,” she laughs. “It was really hard when it was light for so long, so I used to play Christmas music.

“I used to try to get myself in the mood by putting Christmas carols on Spotify.”

While in-person appearances at literary festivals haven’t been an option for Kirsten this year, she is hoping to be at Henley’s next autumn.

She says: “I’m going to be in it next year, they said. I didn’t get my act together to ask them this year, but there was a big one called the Stay at Home Festival and that actually helped me because I think if it was in person I was too small a name probably to be invited.

“Loads of stuff went online but the Stay at Home Festival was the big one and that was brilliant because I got invited on to kind of historical fiction panels and one of them was with some quite heavy-hitting authors.

“But, you know, as they said to me afterwards, light and shade and there’s something for everyone.”

• A Post Office Christmas by Poppy Cooper is published by Hodder and Stoughton, priced £8.99. Signed copies are available in the Bell Bookshop. For more information, visit www.hodder.co.uk