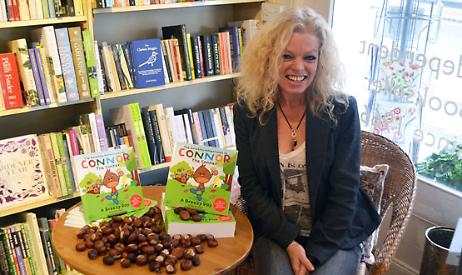 A PILATES trainer and examiner has published a childrens book to introduce youngsters to the fitness system.

Rachel Lloyd, of New Street, Henley, wrote The Amazing Adventures of Connor the Conker, a 40-page picture book aimed at three- to six-year-olds. It is illustrated by Laura Schuth, who is also from Henley.

It follows the adventures of Connor and his siblings Spike and Sticky Bud and includes simple instructions and pages that children can colour in.

Ms Lloyd thought of the idea while examining in Dublin.

She said: I heard there were problems engaging children with Pilates so I started writing stories for classes to engage children with imagery and movement. They worked out so well that I thought I would keep writing them. So many people wanted them so I decided to get it published.

The character of Connor was inspired by a friends 13-year-old son who has autism.

Ms Lloyd said: Connor is the name of my friends autistic son whose nickname is Conks or Conker.

He has wonderful red hair, a baseball cap and boots and loves adventures. He is a lovely little boy who is lots of fun and he is over the moon that he is in a book now.

Ms Lloyd was formerly a dancer, choreographer and dance teacher. She has also acted, appearing in Inspector Morse and a number of West End productions.

• The Amazing Adventures of Connor The Conker is published by Horsechestnut Publishing and is available from the Bell Bookshop in Henley.