Authors have bags of fun at bookshop 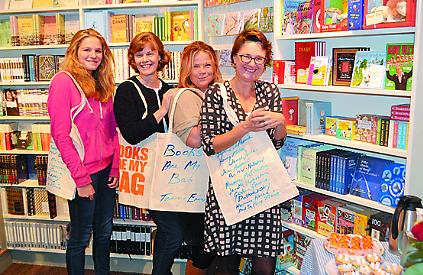 TWO authors visited Henley as part of a nationwide campaign to celebrate bookshops.

Amanda Jennings, from Binfield Heath, and Steve Anthony, from Swindon, spent the day working at the Bell Bookshop in Bell Street.

Mrs Jennings served customers and gave advice on book choices, while Mr Anthony, a children’s author, talked and read to youngsters. Bags designed by artist Tracey Emin were given free to anyone who spent more than £20 or could be bought on their own with the proceeds going to charity.

Manager Hilary Redhead said: “We were busy all day and there was a party atmosphere. The authors were really popular and we sold out of the bags.” The event was part of Books Are My Bag, a national campaign to promote independent bookshops. Mrs Jennings, a mother-of-three, has published two books, The Sworn Secret and the Judas Scar.

She said: “I had a fantastic day. I had a go on the till and recommended lots of books. Steve had a long queue of children and he was doing illustrations, which seemed to make everyone very happy.”