World book day was recently celebrated in local schools, with pupils encouraged to dress up as their favourite book characters.

Click here to see more photographs of the teachers and pupils who dressed up for the event.

Bookish: pupils at Caversham Prep dressed up as their favourite book characters including Wally from Wheres Wally?, Miss Havisham, Burglar Bill and even Black Beauty.

Parents visited school throughout the week to read their favourite books to the children.

Headteacher Jacqueline Lawson said: “World Book Day inspires our children to think creatively and to write with imagination. They see that books are not just to be read silently but they can bring them to life.” 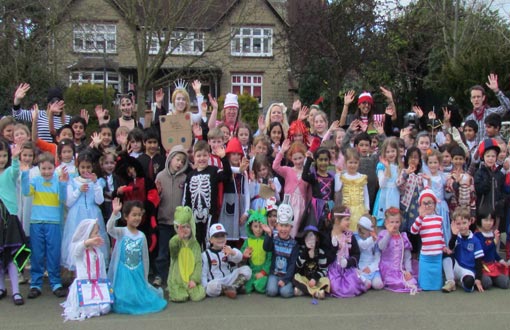 Greys Class won the World Book Day competition to produce a piece of art based on their favourite story from James Mayhews Katie series about a girl who is transported inside famous paintings. Their prize was the visit from Mr Mayhew, who held an art workshop for the children.

To win the competition, the five- to seven-year-olds made a video where they acted out scenes inspired by three artworks, Seurats Bathers at Asnières, Edgar Degas ballerina paintings and The Umbrellas by Pierre-Auguste Renoir. The final scene imagined Mr Mayhew coming to visit the children at the school in Church Lane.

Class teacher Antonia Rolph said: “We had great fun putting the video together and we learnt a huge amount about the world of paintings and art.” Mr Mayhew said the video was the “clear winner”, adding: “It was charming, imaginative and clever.”

Heres Wally: year seven pupils at the Piggott School in Wargrave dressed as their favourite literary characters, including an oompa loompa, Peter Pan and Hermione Granger from the Harry Potter books.

All the English teachers dressed as Wally from Wheres Wally?, below, and the students were asked to track down each one and identify the teacher in disguise.

A treasure hunt was held in the library with a merit mark for every student who took part. Librarian Susan Seymour said: “There was a brilliant response and many students put a lot of thought into their outfits. The library was very busy with students completing the treasure hunt.$rdquo;

Wizard: characters from JK Rowlings Harry Potter books were by far the most popular choices of the children at St Marys School in Henley who dressed up.

Off the page: children in Laurel Class at Badgemore Primary School in Henley dressed up as characters from the Old Bear Stories by Jane Hissey, their current class book.

Paper capers: comic book writer and artist Neill Cameron gave a talk about his work and held workshops at Icknield Community College in Watlington. He said: “I tried to give them some ideas about comics because a lot of kids these days dont grow up with comics the way we did. Comics, by their nature, can be very good way into reading for people who are not yet very confident readers or havent yet found a book to engage their interest. Your reading skills are improving without it feeling off-putting or like hard work.”

Matt Ford, head of languages, said: “We want students reading all kinds of texts, it doesnt matter what they are. We want the students to be reading.”

Pictured, left to right, Edward Reed, 11, as Alfie from the Demon Dentist, Harry Lovett, 11, as an Oompa Loompa, Jessica Bines, 11, as Gangsta Granny, Isla Robinson, 11, as a Minion from the film Despicable Me, Hannah Millard, 10, as Wally from Wheres Wally?

Organiser and English teacher Alison Beer said: “World Book Day is the perfect opportunity to promote a love of literature across the school and get students to talk about their favourite characters and discover new ones. Dressing up is all part of the fun and creates a real buzz among staff and students.”