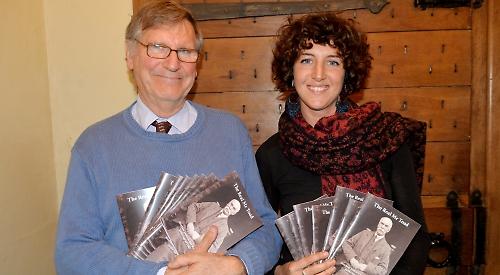 A BIOGRAPHY of a Whitchurch man who is said to have inspired the character of Mr Toad in Kenneth Grahame’s The Wind in the Willows was launched on Friday.

The Real Mr Toad, by historian Michael Redley, tells the story of banker, sportsman and Liberal politician Sir Charles Rose, who bought Hardwick House and its 900-acre estate off Hardwick Road in 1909.

The Elizabethan manor is now owned by his great grandson Sir Julian Rose, who lives there with his family and runs it as an organic farm and forest.

Mr Redley, of Norman Avenue, Henley, began researching Sir Charles’s life two years ago when he was asked to give a talk at Hardwick House by a woman who had hired it for a private function. Miriam Rose, Sir Julian’s daughter, attended the event and was fascinated so asked Mr Redley to return and give another talk to the public.

The pair then decided to collaborate on the first official biography of Sir Charles.

The family gave Mr Redley full access to their archives, including personal letters which had been locked away for more than a century.

Sir Charles was a racehorse breeder, keen aviator and an early proponent of the motor car. He died in 1913, aged 65.

Mr Redley’s 80-page booklet examines his public achievements and his private life, including his infidelity and the deaths of three of his sons in the Boer War and First World War. Ms Rose said: “As a fairly non-conformist family, we’d never wanted to revere this enormously wealthy and influential man — in fact, we never really talked about him and were slightly embarrassed.

“However, working on this has really demystified him and showed that he, too, was quite critical of the established order of his time. It feels like we’ve reconciled ourselves with his memory.”

Mr Redley, who teaches at the University of Oxford’s department for continuing education, said: “It was a delightful process. Sir Charles was a fascinating subject and with the family’s support it all fell into place very easily.”