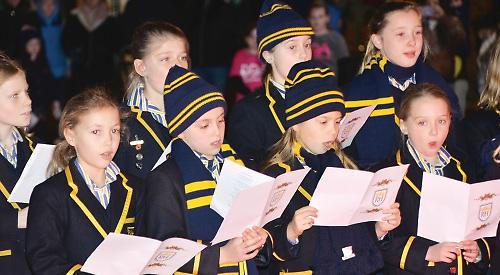 They sang in choirs, performed choreographed dance routines and acted in front of crowds of people.

The charity initiative is taking place at different venues each evening until Christmas Eve. Each night has a different performer and venue but the identity of acts is kept secret until they appear. Every show has a bucket collection in aid of a charity or good cause.

On Sunday evening children sang and danced for more than 100 people in Falaise Square.

The chamber choir from Rupert House School in Bell Street sang Silent Night and The Twelve Days of Christmas as well as We Wish You A Merry Christmas with which the audience joined in.

They were followed by children from Steph’s Dancing Divas and Dudes performing arts school, who presented three routines choreographed to popular songs under the direction of Steph Maxwell, the school’s owner.

The first was a modern-style performance set to Answerphone by Banx & Ranx and Ella Eyre in which they wore pink and blue shirts bearing the school’s logo.

Another group then danced to an R & B version of Deck The Halls while dressed in green or red tops and sparkling skirts.

Then all the children came together for a longer routine set to Extraordinary Merry Christmas by the cast of Glee.

The evening was in aid of Headway Thames Valley, a brain injury charity based at Brunner Hall in Greys Road, and was supported by Henley Scan, which gave out mulled wine and biscuits.

The fun set included a rendition of Let It Snow. The evening was in aid of Parkinsons UK and music school director Laura Reineke and Mayor Glen Lambert then presided over a raffle. Calendar organiser Richard Rodway said: “The orchestra are great fun and embody what the living advent calendar is all about.”

On Monday evening six students from The Henley College performed songs from the musical Cabaret at the college’s drama hall in Deanfield Avenue.

The 1966 musical is the college’s Christmas show and will run until Wednesday.

The students sang Willkommen, So What?, It Couldn't Please Me More (A Pineapple) and Money.

The show was in aid of the college’s Bright Futures scheme, which supports students with mental health problems.

College principal Satwant Deol said: “We approached the Living Advent Calendar about taking part. We are really proud to be part of the community — that’s our whole ethos — and we love the support we get from Henley residents.

“I’d like to thank the community for turning up, the staff and our students for performing brilliantly.”

On Tuesday evening, two stars of the Kenton Theatre’s pantomime Dick Whittington performed on the stage in front of an audience of about 80 people. William Hasell, who plays a dame, and James Clifford (the cat) told jokes and flirted with people in the front row. They then involved the audience in a game of which side could sing Jingle Bells loudest.

The event raised £143.82 in aid of the Teenage Wilderness Trust and the Charlie Waller Memorial Trust

The singers emerged from the home dressing room to be greeted by about 100 spectators.

They sang Half the World Away by Aurora and Have Yourself A Merry Little Christmas.

The evening was in aid of Badgemore Primary School.

The audience was served cider and lardy cake by the evening’s partner, GPC Marketing.

Mr Rodway said: “The choir performed for the first time with us last year and were so good and well received that we were eager to bring them back”.

On Wednesday last week, blues group Ma Bessie and the Pigfoot Band played to about 100 people at the Shaun Dickens at the Boathouse restaurant. The band comprised Matt Foster (guitar) Chuck Lloyd (saxophone) and Julia Titus, alias Ma Bessie, (vocals) and their set included Careless Love, Whip it to a Jelly, St Louis Blues and Down by the Riverside.

The event was in support of the Margaret Clitherow Trust and Home for the Good.

The 30 singers, led by conductor Lucy Hewes, rattled through a range of contemporary hits and Christmas classics such as Shakin’ Stevens’s Merry Christmas Everyone, with choreographed dance moves.

The evening raised £231 for the Wyfold Riding for the Disabled Association.

The 100-strong audience were served mince pies, sausage rolls and wine provided by the Pielicious and supported by Knox & Eames chartered accountants.

Mr Rodway said: “The performances so far have been of a really high standard with a good mix of pros, semi-pros and the great quality, fun, community performers.

“We had our first ever night at the 60+ Social Club, which was great.

“We are delighted with everyone’s enthusiasm and support. We are ahead of where we were last year and that was a record-breaking year.

“We have got some new and exciting acts still to come, providing good festive fun.”