The dogs are missing you, Angie, but don't come out of Big Brother house yet 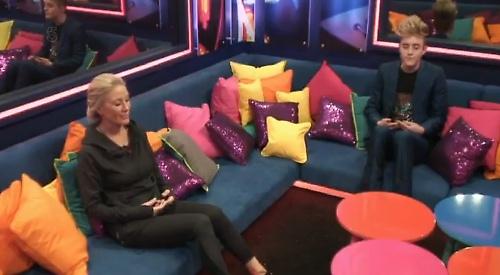 THE partner of Angie Best is urging people to vote to keep her in Celebrity Big Brother, despite admitting the couple’s dogs have been “down in the dumps” since she went into the house.

Mrs Best, a personal trainer from Bix, has been nominated for eviction tonight (Friday) after her fellow housemates grew weary of her promoting a healthy lifestyle.

She is one of five housemates up for the public vote after receiving two nominations — from TV presenter Coleen Nolan and glamour model Nicola McLean.

Mrs Best’s son Calum, a model who is also in the house, was not nominated for eviction on the Channel 5 reality show.

Mark Miller, Mrs Best’s partner for more than 20 years, says while he would be glad to have her home again, he wants fans to vote for her to stay on the show.

He said: “I’m a very competitive person and so are Angie and Calum. I want her to show people how spectacular she is and I want her to win, so I’m willing to make the sacrifice of not having her home yet.

“I think she’s doing really well. Any time she’s on screen I’m glued to it because that’s my girl. The best bit was when she went in and Calum clocked that it was her.

“There was also a clip of her in the morning meditating in bed and I thought, ‘that’s my girl, in her own little world, doing her thing’.”

“They are moping around like something terrible has happened,” he said. “They are so down in the dumps and just not the same.

“We are a really tight group — we call the dogs our kids and they are missing the most important person in that group.”

Mrs Best, who owns the Metaphysical gym at Henley Business School, was nominated in Monday’s show after some housemates got fed up of her health tips.

Family and friends will be travelling to the house for the eviction and hope Mrs Best will not be coming back with them.

Friend Lynne Lambourne said: “They are both doing so well but Angie is up for eviction so we are doing a massive campaign on social media to keep her in.

“I think one of the main reasons for her nomination was that she was talking to the other housemates about being healthy.

“ If that’s the worst thing they can say about her then she’s doing a marvellous job. It’s showing her fun side and her and Calum are getting on great. It’s so sweet how he looks after her and explained things when she was nominated.

“When she was dancing with James we were cringing but she loves it and whenever they aren’t doing an activity she’s practising. Maybe next year it will be Strictly Come Dancing!

“We are desperate to have her home but it would be great to keep her in a bit longer because people haven’t seen everything yet.”

On Sunday’s show, Mrs Best taught glamour model Bianca Gascoigne to meditate as part of a task to keep her distracted while Cosmo led a show pony through the house.

As she sat Bianca down and told her to relax, she said: “Sadly, we can’t stay here too long because we are surrounded by a house full of idiots!” The following day, Mrs Best was trying to meditate in one of the quiet rooms when she was joined by John Grimes, one half of pop duo Jedward, who sat next to her.

Mrs Best tried her best to concentrate but kept one eye open to watch his antics.

Calum explained to his mother that it was up to the public to decide who should be evicted.

He had nominated Stacy and Speidi while Mrs Best also nominated them, along with Armacost.

“You’re not going anywhere, I’m not having it,” Calum told her.

Earlier he had told housemates that being in the house with his mother could help them both stay in longer. Calum said: “Without a doubt it’s going to work in my favour. I was the biggest lothario bad boy in this country, now I’m here doing this show with my mum!”

Later, Mrs Best asked him: “You will tell me if I’m making a fool of myself?”

Calum, who runs a gym near his mothers, has been turning heads with singer Stacy telling Big Brother that she “really likes” him.

Nolan gave him a lap dance as part of a dare game but their relationship soured later when she said she would have a one-night stand with Calum while talking to footballer Jamie O’Hara.

Calum, who walked in during the conversation, was put out by the remark and later told Big Brother: “I’m not going to be put down to make someone feel better. I’ve worked for eight years to put down this reputation, I’m not that guy.”

On Monday’s show, Calum settled his dispute with Nolan, saying: “I worked my ass off not to be that dude. It was a label.”

She replied: “I had no idea that was a big issue. I’m really sorry.”

On Tuesday’s show, Mrs Best was given the task of putting the five celebrities she thought were the most unhealthy on a detox programme.

She chose Calum, Cosmo, Nolan, American singer Ray J and DJ Brandon Block, who all had to consult her before smoking, drinking or eating during the day.