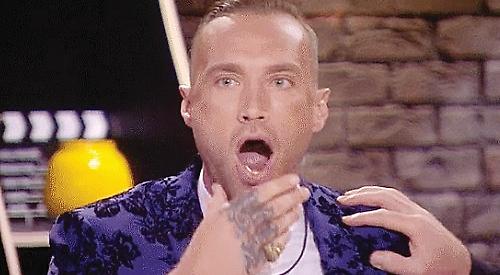 ANGIE BEST gave her son Calum a shock as they both entered the Celebrity Big Brother house this week.

Model and TV personality Calum, who runs a gym near Henley, had already gone inside and was left gobsmacked when his mother walked through the door during Tuesday’s launch night programme.

Viewers of the live Channel Five show watched the stunned looked on his face as he said: “Oh my God, it’s my mother!”

Mrs Best, a personal trainer who owns the Metaphysical gym at Henley Business School and lives in Bix, was the last of the 15 housemates to enter the house. She had been kept away from Calum earlier in the evening so she didn’t ruin the surprise and had been keeping it secret from him in the weeks beforehand.

The 64-year-old, who is best known for her marriage to the late George Best, wore a patterned lace top and black jeans to enter the house.

She told presenter Emma Willis that Calum hadn’t heard “a whisper” about her appearance. She added: “He’s going to have a heart attack, God bless him. His whole thing is going to be completely dismantled because Mamma’s here!”

Calum, 35, who also appeared on the show in 2015, had entered the house wearing a striking blue and black suit. He was taking part in the first housemate task when he spotted his mother on the stairs and soon afterwards welcomed her with a hug.

Lynne Lambourne, a friend of Mrs Best who lives in Peppard and attended the launch night with other supporters, had also kept the secret.

She said: “Calum has had no clue since it was agreed in October and every time we’ve met up with him it was quite tricky. Angie had him for Christmas and I don’t know how she kept it a secret. He had no idea — you could tell by the look on his face when she walked in!”

She added: “We cheered them both into the house and it was really fun. They will both be excellent, they are so close. They love working out together and it will be a nice opportunity for them to spend more time together.

“We saw from the last time he was in there that he’s a real gentleman and a lovely guy. She will be amazing too — it’s a great opportunity for people to see the other side of her. She’s not just George Best’s wife, she will have them all exercising in no time! Go, Team Best!”

His mother’s arrival wasn’t the only reunion for Calum, who is living in the house with former girlfriend Bianca Gascoigne, daughter of ex-England footballer Paul.

They met on ITV’s Celebrity Love Island in 2006 and went on to win the ITV show as a couple.

Calum came third in Celebrity Big Brother two years ago, losing out to winner Katie Price after 31 days in the house. He is a regular on reality shows, also appearing on Come Dine With Me and winning Irish show Celebrity Bainisteoir, in which he coached a Gaelic football team.

Calum opened the Best Life Gym, off Marlow Road, opposite his mother’s gym, in 2015. He also runs a supplements company.

Other housemates on this year’s show include Loose Women’s Coleen Nolan and former Strictly Come Dancing professional James Jordan, who have both appreared in previous series, and Game of Thrones actor James Cosmo. In a blog written before she entered the house, Mrs Best said she was excited to spend more time with Calum but scared at the thought of sharing a bathroom with “all those strangers”. She said: “I think I might be one of the oldest housemates so it’s my opportunity to prove that we over-60s are too young to be old, ready to accept any challenge and can look just as good as any of the younger ones and certainly be as much fun.”