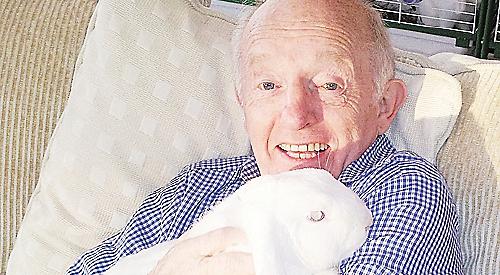 THE widow of magician Paul Daniels has designed a badge in his memory to help raise funds for research into the disease that killed him.

She was involved in the design of the badge, which features a white rabbit like those used in the couple’s stage show, holding a magician’s wand as it peeps out of a pink top hat.

The hat is the symbol of Wear A Hat Day, a fund-raiser that will take place on Friday, March 31, almost exactly a year after the entertainer’s death.

McGee said: “Paul died four weeks and five days after the diagnosis. I still miss him every day. I still love spending time with our rabbits — he loved them so much and they make me think of him.

“I am really proud to be able to work with Brain Tumour Research in this way and I think Paul would have been too. I hope people will buy these badges as by wearing one they’ll be remembering Paul and supporting vital research.”

The badge is available for a suggested donation of £5 on eBay and is already selling well.

Sue Farrington Smith, chief executive of Brain Tumour Research, said: “We are enormously grateful to Debbie who, like so many of our supporters, is bravely sharing her story with the aim of ensuring other families do not have to bear the pain they have experienced.

“Brain tumours kill more children and adults under the age of 40 than any other cancer yet just one per cent of the national spend on cancer research has been allocated to this devastating disease. This is unacceptable.”