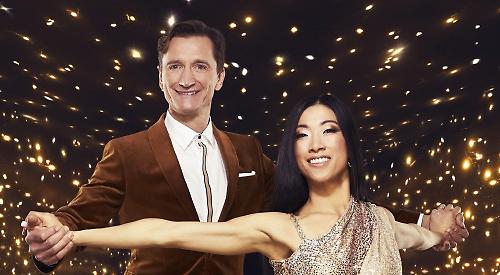 GRAHAM BELL was the only contestant to perform solo when he made his debut on ITV’s Dancing on Ice.

The Henley television presenter and former Olympic skier was meant to appear in the final group number with professional partner Yebin Mok during this year’s opening episode on Sunday.

But he was forced to go it alone after Mok was injured in a freak accident as they were training a few days earlier.

Bell, 54, lost his balance on the rink at ITV’s Bovingdon studios and fell over, then the American figure skater fell on him.

She landed on the heel of his skate and pierced her shin on the tip of the blade, tearing a muscle open.

Mok was rushed to hospital and will be out of action for several weeks but hasn’t suffered any lasting damage.

Bell has now been paired up with Karina Manta, another American ice dancer, until Mok has recovered but there wasn’t time for the pair to learn Sunday evening’s routine.

Instead he hit the ice by himself beside celebrity contestants Colin Jackson, a fellow Olympian, singer Myleene Klass, actress Faye Brooks, DJ Sonny Jay, and television star Billie Shepherd and their partners. The performance, which was set to the Dolly Parton song 9 to 5, was themed around working life and saw the stars dancing in office attire.

It opened with Jay and dancer Angela Egan waking up in “bed” before the camera pulled back to reveal they were standing against a backdrop and then the others raced in to join them.

Bell, who wore a light pink shirt with braces and a tie, entered pushing a desk and performed a spin towards the end, incorporating a “skiing” motion in a nod to his sport and finishing with a
“ta-dah” hand gesture.

He then looked around at the other contestants with their partners, pretended to look sad for a second and then smiled into the camera, shrugged and skated off.

In rehearsal footage shown just beforehand, he told camera crews: “A solo spin in show one? I just hope I can nail it.”

He also shared a photo on Instagram of himself and Jackson, whom he coached for a 2008 episode of the BBC’s Ski Sunday, in costume alongside the caption: “Would you buy a used car from these men?” Bell and their partners were interviewed by presenter Phillip Schofield during a break from the action.

Schofield said he and co-host Holly Willoughby had seen a photo of Mok’s injury but it was too graphic to be shown on screen.

He said: “Graham, this has been a dramatic week.”

Bell replied: “Yes, it has indeed and I am so sorry, I just feel so guilty.

“I fell and Yebin fell on my skate and slashed her leg open and it was the worst feeling.

“I’m used to injuring myself but not other people and it feels absolutely terrible.

“Karina has been absolutely fantastic and we’re all learning the new routines.”

Schofield said: “Yebin is here too, with a big smile on her face — and a big hole in her leg! How are you feeling?”

Mok praised the NHS for treating the injury, saying: “I’m feeling a lot better and it’s healing up really well so I’m very happy and looking forward to coming back.”

Because of the coronavirus restrictions, the 12 contestants in this year’s 13th series have been split into two groups who will compete on alternate weeks.

This Sunday, Bell and the others from last week’s group dance will make their first appearance before a judging panel of actor John Barrowman, dancer Ashley Banjo and Olympic figure skating champions Jayne Torvill and Christopher Dean.

However, Leshurr got the fewest votes from the audience so is at risk of elimination.

She will take part in a dance-off against the contestant with the fewest votes this week before the judges will decide who stays in.

Bell told followers on Twitter about training with his new partner.

He said: “Karina is great and is picking up our first routine at lightning speed.

“We need to learn a skate-off routine and start work on a week 3 dance. Yebin will be back on the ice soon.”

Mok tweeted: “Absolutely gutted not to be able to skate with Graham... but will focus all my energies on healing and hoping to skate with him again.”

Bell told the Henley Standard: “Going out alone wasn’t scary as I’m confident enough at skating and the spin was the only concern.

“It’s a very hit-and-miss move — sometimes you get it right several times in a row in rehearsal, so you think you’ve nailed it and then you do a bad one.

“I watched my attempt back with a highly critical eye and I think it was just about a hit. I could have done it better but, to be honest, it could have been a lot worse so overall I’m pretty happy.

“It was a busy routine with a lot going on, which was fantastic, but the real work starts now.

“I couldn’t do this by myself — I’ve got a great team behind me and things are going well at the moment.

“It’s terrible to have injured someone like that but Yebin was okay and will be back later as long as I can stay in the competition, which is a pretty good motivation to do my best.”

Bell, who was previously performance director on Channel 4’s The Jump, had never tried ice skating before signing up for the show and says he had to “unlearn” several habits from his skiing career.

He did some of his training off the ice at Athlete Service in Greys Road car park in Henley.

• Dancing On Ice is broadcast on ITV on Sundays at 6pm.