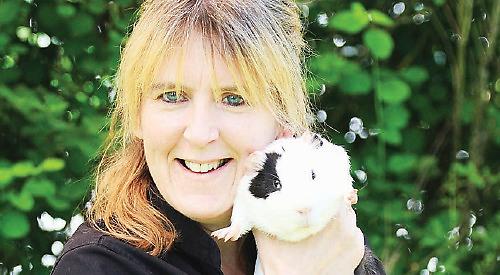 IN some parts of the world, they’d be on the menu.

But the guinea pigs at the Golden Ball pub in Lower Assendon have the run of the place... well, at least of their shed in the garden, dubbed “the pig palace” by regulars.

The 17 furry rodents are cared for by manager Sharon Harper when she’s not looking after customers at the Brakspear pub and restaurant.

She spends around £100 a week on food and bedding for the animals, which she only began collecting by accident nine months ago.

Ms Harper, 49, from Woodcote, explained: “My sister had a guinea pig called Freddie which she got from the Blue Cross charity.

“She was having some work done at her house and asked me if I would look after him as guinea pigs do not do well with noise.”

Soon afterwards her sister brought two more, Sue and Shirley, as guinea pigs can get lonely and then Blue Cross asked her if she would take even more. These included some from a cruelty case where the owner was found to have more than 100 at their house.

Ms Harper said: “Some didn’t make it and some needed ongoing veterinary care. One of them had 18 punctures in his back. Another had facial wounds. Some of them had mites and skin problems and they were very thin. I took five or six that needed re-homing immediately.”

She has since accepted more guinea pigs from both Blue Cross and the Oxfordshire Animal Society so that her total stock now includes seven females and 10 males with breeds including American, Abyssinian and Sheltie.

The animals are kept in hutches in the shed, which is monitored by CCTV cameras for security, and they have runs where they exercise.

Ms Harper said: “It has been a learning curve looking after them. They have their own needs and they need exercise. I use fleece for their bedding and their hay comes from Lucy’s Farm in Harpsden. They have to be cleaned out every day.

“They don’t produce their own vitamin C so you need to give them pellets to get all their minerals and vitamins.

“They have fresh vegetables every day. Everyone knows me in Waitrose in Henley as I push a trolley around with lots of romaine lettuce and kale. Carrots are like chocolate to guinea pigs so you give them this once a week rather than every day. You also have to be really careful. I can’t put boys together unless they have grown up together because they tend to otherwise fight to the death.”

Ms Harper says she has struck up a good relationship with the staff at the Henley Veterinary Centre in Reading Road who help her.

“One of the nurses comes up for a couple of hours as the guinea pigs have to have their nails clipped and be inspected for mites,” she said.

“They also have a footbath and I brush their hair. They are pampered guinea pigs. Their shed is called the pig palace as that is the nickname it was given by our customers.

“When people ring up to book a table at the restaurant they often ask how the guinea pigs are.”

Ms Harper began working at the Golden Ball with business partner and executive chef Stephen Luscombe when they took over the pub in 2008. She had spent the previous 12 years managing the Crooked Billet in Stoke Row, the village where she grew up.

Ms Harper said she enjoyed teaching the children of customers about the guinea pigs.

She said: “On a Saturday and Sunday lunchtime, we take the children that are here for lunch down to the pig palace. They can hold the guinea pigs and brush them and talk to them. They have also done lots of pictures and drawings which I put up in the shed.”

Mrs Harper said all the staff at the pub helped her out.

“With the busy and hectic job that I have, the palace is very much a stress-free zone for me and the team,” she said.

“I love my little guinea pigs and am happy that I can give them a better life but I can’t have any more otherwise I would have to buy another shed!”

She added that guinea pigs should not be bought from a pet shop but always from an animals sanctuary.