Spinathon in aid of cancer treatment for three-year-old 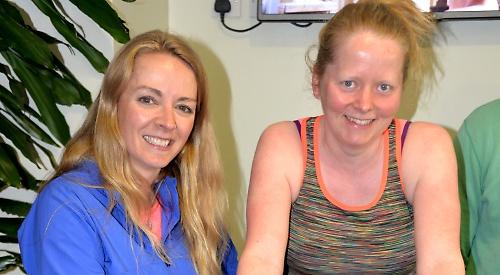 A 24-HOUR spinathon raised more than £1,000 towards a young child’s cancer treatment.

Dozens of people took part in the event at The Club in Mapledurham, which was organised by Yvette Kershaw, of Rokeby Drive, Tokers Green.

They included her husband David and dozens of members and staff, including club manager Christel Garcia and gym manager Daniel Hawkins.

Two static bikes were set up in the main reception area and were in constant use for most of the challenge. Participants were encouraged to donate at least £5 but many gave more.

The proceeds will go towards the £250,000 needed to fund treatment for three-year-old Reuben Virdee, who has a rare type of cancer called neuroblastoma.

Mrs Kershaw, who is friends with his parents Jessica and Kulwant, from Maidenhead, is to take part in a 750-mile sponsored cycle ride later this month.

She said: “It was absolutely amazing. We’d accepted we wouldn’t have two bikes going for the whole time but it’s incredible how popular it was. It was very busy apart from the graveyard shift.

“My husband and I did a total of about seven hours and we had a lot of support from so many different people.

“One member did more than two hours while another went home and donated £450 after talking to us about the cause.

“It’s so nice to see people taking action like that. It’s one thing for people to listen and encourage your efforts but it’s really heartening when they get behind you in a more practical way. As well as receiving cash, I could hear my phone pinging with loads of online donations throughout the night and that really encouraged me to keep going.”

On May 27, Mrs Kershaw will set off from the John Radcliffe Hospital in Oxford with the aim of reaching John O’Groats in a week.

She hopes to raise £10,000 and will be joined on the final leg of the journey by her husband and their children Lexi, six, and Ellie Skye, three.

To make a donation, visit www.gofundme.com/rideforreuben