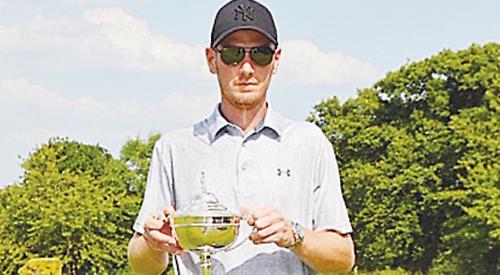 ALEX Luxon and Julie Parsons have been crowned the new club champions at Mapledurham Golf Club.

Playing over two days, the men’s competition was fiercely contested with eight players separated by just two shots after round one.

Keith Newby led the way in both the net and gross competitions with a round of 74 net 61. The top of the leaderboard was tightly bunched heading into round two on Sunday where Luxon continued the fine form he has shown throughout the season to shoot a level par 69. This was enough to see him storm to an emphatic six stroke victory with Max Teixeira taking the runner-up spot and David Mehigan third place.

In the handicap competition Keith Newby followed his net 61 in the first round with a solid net 67 to scoop this honour.

The ladies’ competition was also close after Saturdays play. There were two particularly impressive rounds from Parsons and Teresa Taylor who both carded 79s to distance themselves from the rest of the field.

Parsons managed to emulate Saturday’s round with another 79 on Sunday which was enough to secure her the ladies’ championships by six shots from Taylor, with Danielle McGeoghegan taking third place with an impressive round of 80 on day two.

Parsons also won the handicap competition with net 68 and 70, with Taylor second with 66 and 74 and Irene Manson with 77 and 64 on day two in third.

There were pars and birdies galore in Division 1 of the weekend Stableford at Caversham Heath on Sunday.

Mike Capaldi recorded 11 pars and one birdie and halves of 20 and 21 points as he totalled 41 points. Runner-up Archie Smith recorded even more pars, 12, plus three birdies, but could only muster 40 points. Third was Matt Robertson on countback from Callum Peart, both with 39 points. Robertson rattled up 14 pars and two birdies while Peart had nine pars and four birdies. Peart lost his chance of glory after a bogey on the 16th and a double bogey on the last.

Division 3 winner was Adrian Ford with 37 points. Runner-up was Joseph Lawrence with 36 points and third was Jane Weller with 35.

Neil Scott took the Division 1 honours in the midweek medal with net 70. David Stankard was runner-up, on countback from Jose Fernandez-Moure, both with net 71.

Niall Ward won Division 2 with net 78, although he almost blew it with a quad bogey on the 16th hole and another one on the last hole. Caroline Dover was second with net 79 and third was Javier Dieguez on countback from John Holdsworth, both with net 80.

Mark Slater won a nine-hole Stableford competition on Friday of last week with 41 points. Second was Chris Stacey with 40 points and third was Barry Reynolds with 39 points.