Henley skipper on track to complete first ever marathon 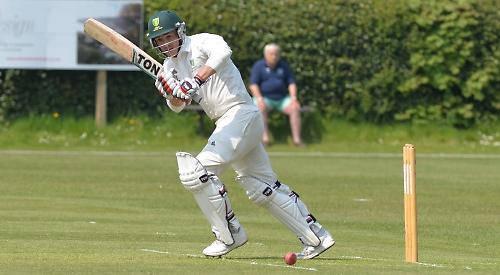 HENLEY Cricket Club captain Michael Roberts is to run his first marathon in Barcelona in March to raise money for the PCA Benevolent Fund as a thank-you for all the help he has received from the association in training to become a sports psychologist.

Batsman Roberts, 27, who played six first-class matches for Hampshire in 2013, was inspired by Michael Caulfield, a sports psychologist who worked with the county. Roberts, who had a first degree in languages and politics, took a conversion course to gain a Masters in psychology at Westminster University and he is now studying for a Masters in Applied Sports Psychology at St Mary’s University in Twickenham.

Both courses have been part-funded through the PCA’s educational fund and Roberts has decided to turn his gratitude for that support into something tangible by running through the streets of Barcelona on March 12.

Roberts said: “I’ve always wanted to do a marathon and the idea of doing it in a foreign country, taking in another city while doing it, seemed like an attractive proposition.

“I was talking to a friend at Henley Cricket Club about it and he was thinking about maybe going to Barcelona just for a trip sometime this year. We put two and two together and decided to do the marathon at the same time.

“The PCA have been hugely supportive of helping me with my transition out of cricket and supporting my journey towards becoming a chartered psychologist.

“They have been so helpful and I see this as a way of raising awareness for another great cause that the PCA has established in the Benevolent Fund.

“I’ve read and heard a lot about the benevolent fund and the people it has helped. It seems to be going extremely well and is a very worthy cause.”

The Benevolent Fund, which is supported by Royal London, is part of the PCA’s commitment to helping former and current players and their dependants in times of hardship and upheaval, to readjust to the world beyond cricket. The fund takes a concerted and proactive approach to help and educate on all health and wellbeing issues is key in helping to negate problems further down the line.

It also supports players and their dependants who might be in need of a helping hand with medical advice, a much-needed operation or specialist advice, care or assistance.

Roberts hopes to raise between £1,000 and £1,500 for the benevolent fund by taking on the challenge of running his first marathon.

“I tend to keep relatively fit throughout the year as it is. In terms of my running I feel comfortable running a half marathon distance and I’ve done a few training runs of 17 to 18 miles already.

“The PCA have been brilliant in supporting me. Each year they have provided a set amount toward my fees which has not only been really appreciated, it has also been needed. I’m not sure that I would have been able to do what I have done without it.”

Donations for Michael Roberts’ Barcelona Marathon can be made at: https://www.justgiving.com
/fundraising/Michael-Roberts21

Leading up to the marathon Roberts will be one of eight Berkshire players to run in the Wokingham half marathon next month.

Dressed in Super Heroes costumes, eight players will be raising funds for Build Africa. Donations can be made via the Berkshire Cricket page at justgiving.com