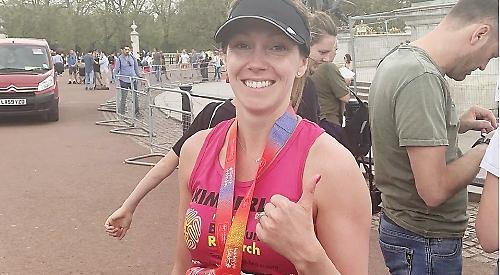 A WARGRAVE woman who took part in the London Marathon last month has already entered the ballot for next year’s event.

Kimberly Hemani, of Mumbery Hill, completed the 26.2-mile race in four hours and 40 minutes, despite having to run in a temperature of 24C.

She was raising money for the Brain Tumour Charity as her uncle Peter Shortman died from a brain tumour and the father of her best friend Kristina Horseman has one.

She was cheered on by her husband Leon and children Craig, six, and twins Lucas and Arabella, three. Mrs Hemani, 34, said: “It was so hot that it was unbearable at points. It was really hard work, a lot harder than I expected it to be.

“My time was a bit slower than I had hoped and I did cry at mile 25 because it felt like it was never going to end!

“But the atmosphere was really good. I had my name on my top and lots of people would shout it out when they could see you were struggling.”

She decided to take part after completing last year’s Reading half marathon in less than two hours.

Mrs Hemani said: “I quite like running anyway and I thought I would like to run a marathon and do it for a good cause. I run four times a week but the training was hard. It took up a lot of time as I was out for three hours at a time and the weather was hideous and cold for a lot of it.”

Despite this, she has put herself forward for next year’s 39th London Marathon. “If I get a place I’ll do it again but if not I won’t go out of my way,” she said.

Mrs Hemani ran the marathon with friend Ali Lewis. The pair have already raised more than £6,700 for the charity, beating their target of £5,000.