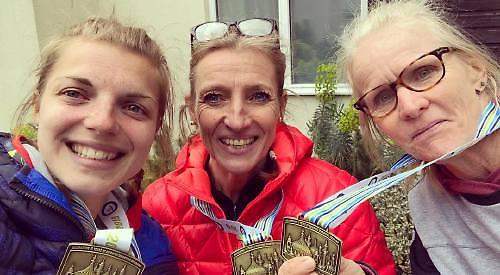 A GRANDMOTHER from Henley has been awarded her third England athletics vest in less than a year.

Caroline Hoskins has been invited to run for her country at the British Masters Marathon Championships on October 20 following an easy win in the masters age group at the Brighton Marathon on Sunday.

The 51-year-old finished in three hours and 54 seconds, almost half an hour ahead of the second-placed masters entrant, despite having missed two months’ training over Christmas and the new year while recovering from a torn hamstring.

She will compete in the national championships, which take place as part of the York Marathon, against runners from the six “Celtic nations” of Brittany, Cornwall, Ireland, the Isle of Man, Scotland and Wales.

Mrs Hoskins, who lives in Watermans Road with her husband David, first represented England at the Great Birmingham 10km in May last year. She then won her age group at last month’s Fleet half-marathon, securing a second England call-up at the Maidenhead half in September.

She was running at Brighton alongside her daughter Sophie Hoskins, a PE teacher who plays as a defender for Henley Hockey Club’s women’s first team and in goal for its mixed team.

Also taking part was Julie Rainbow, 54, a fellow member of the Reading Roadrunners club who runs the Three Horseshoes in Reading Road, Henley, with her husband Nigel. She achieved a personal best of three hours, 51 minutes and 22 seconds.

Mrs Hoskins said: “I don’t think my time was bad for an oldie! I’d been aiming to place highly and although I’d recently been injured, I felt almost 100 per cent recovered and was beaming and smiling all around the course.

“I was lucky to have an elite place, which meant I started at the front and that was massively helpful as I had more space in the field. I never had a specific time in mind because you can never tell how you’ll feel or what the weather will be doing.

“I did the London Marathon last year then a few shorter events straight afterwards and I just got carried away and overused my hamstring. I saw a physiotherapist and put a lot of work into rehabilitation so it was quite a hard process.

“I felt fantastic and really made the most of it on the day. It was hilly and incredibly windy running along the seafront on the final stretch but I was very happy because being injured made me realise how much I miss running.

“Sophie was also over the moon with her performance and it was lovely for us to be taking part at the same time.”

Mrs Hoskins grew up in Henley and was a keen cross-country runner when she was a pupil at Gillotts School. She later played for Henley Hockey Club before leaving to have her children Ben, who now has a boy and a girl of his own, and Sophie.

She got back into running after the youngsters arrived and ran her first London Marathon in 2002 before taking part in about 15 marathons at Brighton including this year’s. She joined Reading Roadrunners about a decade ago as she wanted to compete more seriously.

She said: “I will be taking it easy but won’t be taking time off completely before I start training again. I’ve already been for a swim and done a very slow recovery run and will probably spend the next six weeks doing things like that before picking up the pace in the summer.

“I think they’ve only recently started awarding England vests to masters runners and I feel very lucky to have run for my country at several distances.”

Reading Roadrunners’ ladies captain Samantha Whalley said: “I had no doubt that Carrie would come back from her injury with a bang. She is an incredible runner and such an inspiration to us at the club.”