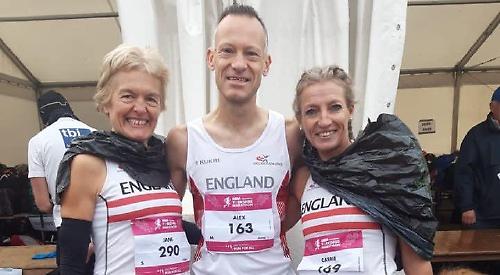 RUNNERS from Henley, Caversham and Goring put in good performances for England in their respective age groups at the York marathon last month.

Alex Harris, who was making his international debut, ran a personal best of two hours and 49 minutes, beating his previous best time by almost seven minutes.

Harris, 51, of Albert Road, Caversham, also ran a personal best in last month’s Maidenhead half marathon, and was buoyed by the news that his 16-year-old daughter Naomi had been selected to take part in the British Athletics Youth Talent Programme. Naomi is a sixth-form pupil at Highdown School in Emmer Green.

Speaking after his race in York, Harris said: “It was a tougher course than I expected. I struggled with a cramping thigh for the second half of the race, so I’m very happy with that time.”

The retired languages teacher, speaking after the race, said: “I was going really well until 30k, but then it got very tough. I managed to keep going… just!”

Henley’s Caroline Hoskins, who was representing England at her third different distance, finished her race in under three hours in a time of 2 hours, 57 minutes and 56 seconds in the F50 category.

Speaking after the race, a delighted 51-year-old Hoskins said: “I’m over the moon about running under three hours again.”

The day was a good sporting one for the grandmother’s family as her daughter Sophie, who plays hockey for Henley Ladies 1sts, ran a personal best time of three hours, 39 minutes and 45 seconds at the Abingdon marathon.

All three runners who competed at York are members of Reading Roadrunners.