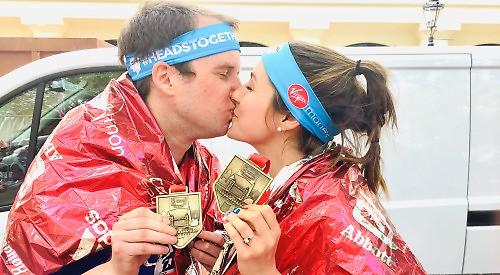 WHATEVER else runner and blogger Charlie Watson ended up eating on Christmas Day, there was always going to be chocolate.

Chocoholic Charlie may now be a registered dietician and a veteran of 13 marathons but that doesn’t mean she’s about to ignore her famously sweet tooth.

She says: “If you know me, you’ll know I’m kind of obsessed with chocolate. I probably have chocolate every single day.”

Charlie, who lives in Emmer Green, used to work in the cookery department at Good Housekeeping magazine where her colleagues coined the term “choc o’clock” to describe how routinely she reached for the stuff.

Which is why she has included a mouthwatering chocolate recipe in her new cook book Cook, Eat, Run, which was published yesterday (Thursday) and is now available on Amazon.

“There was no way there wasn’t going to be chocolate and plenty of it in my cook book,” she says.

Now we’ll all be able to make chocolate pretzel bark, a scrummy mix of dark and white chocolate, pretzels and pistachios, even though she wrote the book with serious runners like herself in mind.

Charlie, 31, explains: “This simple but impressive recipe gives you that chocolate hit that so many of us crave around 4pm or after dinner, while the nuts and pretzels help keep you satiated — and fuel that evening workout.”

She tested her recipes for months on her family — husband Tom, a British Airways pilot, and her teacher mum Victoria.

She says the result is not a diet book but a collection of 75 recipes you can enjoy all year round as part of a healthy lifestyle.

It features recipes for homemade running fuel and gels, plus 20-minute meals for those in a hurry.

There are also dishes from elite athletes, including one from American distance runner Sara Hall, whom she met when they were both competing in the New York marathon.

“What I have tried to do is simplify nutrition around running and sport,” says Charlie. “I think there is a problem with conflicting information out there and people are left not knowing what they are supposed to be eating. You don’t have to make sacrifices, you should still be enjoying your food. And it shouldn’t be just about nourishing your body — it is equally important to appreciate the social aspect of food and how it makes you feel.

“Having a longer-term goal is much more likely to keep you motivated and inspired than taking an interest as a short-lived New Year resolution.

“But actually writing this book was so much harder than I thought it would be. It took much longer than I expected because some of the recipes had to be a done a number of times in order to get them right.”

Though she confesses to being a fan of burger and chips as a post-marathon meal, one of Charlie’s favourite dishes in the book is a recipe for fast fish tacos, which was inspired by a trip to Portland, Oregon, which she took with her mum.

And who wouldn’t like her recipe for monster workout cookies, which are packed with M&Ms, sultanas and peanut butter?

Charlie says: “This is a book you can use whether you are into fitness or not. I am already getting feedback from people who have made the meals and and said they work. I’m still really nervous about it though.”

She needn’t be. Those readers will no doubt include fans of her blog the Runner Beans, plus her 56,000+ followers on Instagram. The book has already had a six-page spread in Runner’s World magazine.

Charlie came relatively recently to running but was always keen on sport, which she used as therapy during an unhappy spell at boarding school in Hertfordshire.

When she first started marathon running, she admits she didn’t even know how far a marathon was and her top priority was to find a good sports bra.

Her motivation to take it up seriously was triggered by the suicide of her friend and housemate Vic Feinstein while she was studying geography at university in Leeds.

“Vic suffered with depression, which none of us really knew anything about and it had a big impact on me,” says Charlie. “I took it really badly and found it hard to get over his death. I was struggling to process what had happened.

Three years after her friend’s death she was lining up to start the London Marathon, having raised £4,500 for mental health charity MIND, and she has since completed another 12 marathons all over the world.

Charlie says she has had mental health issues of her own. There was a period in her life when she was smoking, drinking and partying more than was good for her. She says: “I don’t think we talk about mental health enough as a society and I sometimes have this feeling of social anxiety when I feel I don’t want to put myself out there.

“I talk about it a lot on social media as I think being open and honest is the best approach. Scrolling through social media can be tough as everything seems so perfect.

“Alcohol has also affected me and in the past I have used it as a crutch to get over my anxiety.”

Charlie used to live in Fair Mile, Henley, and still runs in the town and really appreciates all the sporting events that it has to offer.

“I still do lots of my runs in the morning along the river in Henley,” she says. “It is an amazing place for sports and you are never on your own. Even when I’m running at 5.30am there are cyclists or people rowing alongside me.

“I did the Wargrave triathlon this year and I was nearly last. It was my first river swim of the season and the water was so cold I had a bit of a panic attack.

“But I got to the finish line and was given a glass of champagne and I thought, ‘that’s just so Wargrave’. I enjoyed the running better because I could overtake people.”

Challenges in the new year will include her first Manchester marathon and she will also be helping to train her sister-in-law Becca Thomas for the London Marathon in April.

She might even end up competing against her husband. The couple have competed together in several runs, including the 2017 London Marathon, which Charlie says was her favourite to date.

“My husband did his first marathon on his own but the next time in London he asked if we could run it together. I was setting the pace for him but I was not allowed to ask him if he was coping because apparently that’s patronising. I’m faster and more competitive than he is.”

She recently graduated with her degree in dietetics and nutrition from London Metropolitan University and is now looking for a “proper” job.

But before then she will be travelling next month with her whole family — all 20 of them — for a holiday in California and Mexico to catch up with relatives in Australia and New Zealand who’ll be meeting them there. Choc’s away!