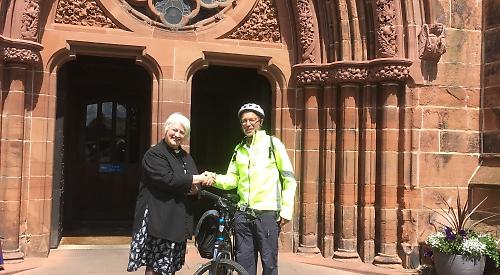 A MAN cycled to all 42 Anglican cathedrals in England in three months to help provide safe drinking water to thousands of disadvantaged people in India.

Nigel Woolven, 64, from Wittington Green, Medmenham, combined his passion for cycling and visiting cathedrals and raised more than £10,000.

The money will be used to help New Life Church, which is working with ATG Ministries to drill 100 bore wells in villages in the Telangana province.

Mr Woolven, a retired chartered surveyor, said: “I had been sponsoring my friends to do various challenges and I thought it was about time I did some sort of challenge myself.

“To be able to provide a village with fresh drinking water may sound simple, but it makes such a huge difference.

“The challenge was tough and the wind made it tougher at times. On more than one occasion I asked myself what the heck I thought I was doing. I broke each day’s cycling into stages and developed mental techniques for getting up the long hills.

“It has been very satisfying to complete the task. In total, there were 26 medieval cathedrals and none was disappointing.

“I also met many wonderful people along the way, some of whom made donations.”

During the three-month challenge, he pedalled more than 2,000km and climbed over 12,000m.

Starting in Truro on April 1, he visited Salisbury, Winchester, Liverpool and Manchester. The final leg of the journey was Newcastle to Carlisle, riding along Hadrian’s Cycleway.

The £10,000 does not include Gift Aid, so Mr Woolven hopes to use the money to pay for at least 10 drinking wells.

The father-of-four, who lives with his wife Sally, has always been a keen sportsman and makes a point of visiting cathedrals when he visits a city for the first time.

His favourite stop on his tour was Exeter and he said many of his individual challenges were made easier by people offering to let him stay with them.

Mr Woolven added: “I am a churchgoer myself at Marlow River Church. I emailed all the cathedrals beforehand and they were all very accommodating.

“The reason why it was so special was because each cathedral has a unique story to tell. It was special to take part in and finish.”

He hopes to be able to see the benefits of his hard work by travelling to India next year.

Mr Woolven said: “Many people in India do not have access to clean drinking water and have to walk miles to get any form of water at all.

“Waterborne diseases, such as cholera and typhoid, destroy the lives of adults and children alike.

“Clean water has a significant benefit on the health, economy and overall life of every person in a village and they in turn can help others.”