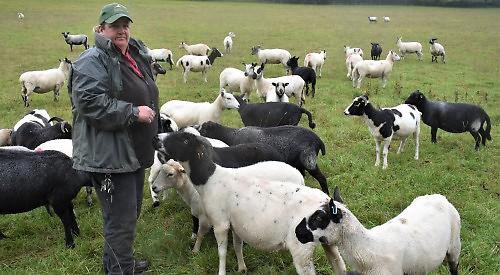 A FARMER is calling for professional dog walkers to be regulated after one of her sheep was killed and three others were mauled by a large pack which was loose on private land.

Tracy Betteridge, who keeps about 280 lambing ewes on farmland off the A4155 at Medmenham, says the incident has cost her hundreds of pounds in lost earnings and expenses.

Her sheep are pregnant and due to give birth in February so on top of the cost of treating the injured ones, others may later abort their lambs in response to the stress.

Miss Betteridge was alerted to the incident on Thursday last week by a member of the landowner’s management team who saw a woman walking 10 dogs in the adjacent woodland.

None of the animals was on a lead and they were well away from the public footpath which runs through a small section of the site.

The dogs, which were of various breeds, had broken free and were chasing a deer which is believed to have leapt into the field where Miss Betteridge’s flock grazes. It is thought that at least one of them jumped over the fence and attacked the sheep before returning to the walker, who left after being ordered off the land.

One ewe, who was pregnant for only the second time, died immediately from shock after colliding with the fence while fleeing and three others had chunks of flesh torn from their backside, chest and shoulders.

Their wounds were sewn up and they are expected to fully recover, although it will take several months.

Miss Betteridge, who is known as Bill and sells meat through her business Chiltern Lamb, said the same woman was seen in the woods earlier in the week and it was common to see professional walkers straying off public areas.

Signs have been put up several times but are always vandalised. She said: “They tend to think it’s a free-for-all and it’s okay to walk in these private areas because there isn’t anyone else around. They’re not regulated and I don’t know how many even have insurance.

“It seems anyone can become a dog walker. You see people aged 16 or 17 with huge numbers of dogs which they have very limited control over. Two or three is hard enough and when they get together, a pack mentality sets in. It’s ludicrous.

“I suppose they’re looking at £10 an hour per dog and thinking it’s a good way to make money. They see the dogs getting some exercise and don’t think about the consequences while the owners think they’ve done the right thing hiring a walker.

“I feel sorry for them because one day someone is going to have to explain to their customer why their dog has been shot.”

Miss Betteridge, 47, who has been a farmer all her life, said the full cost of the attack wouldn’t be known for some time.

She believes she knows the person responsible but will not report it to the police as there were no witnesses.

She said: “The ewe who died could have had four or five more sets of lambs in her lifetime. I reared her for two years so there’s also a strong attachment — we do actually like our sheep, otherwise we wouldn’t do it. After a previous attack, a dog owner told me, ‘Well, you were going to kill them anyway’ but that totally misses the point. We want them to live to the highest standards of welfare, not scared out of their wits.

“They’re more or less part of our extended family and I spend many, many hours making sure they’ve got everything they need to be happy and healthy.”

Miss Betteridge said there had been five or six attacks in about as many years. These include an incident in which a rare breed ewe died in 2013 and another which claimed two lambs in 2015.

She says about two years ago, an owner voluntarily euthanised a Rottweiler to avoid criminal charges after it attacked her flock.

She said: “People these days seem to get dogs without thinking whether it can fit in with their lifestyle. They think they can just hire someone else to do the walking while they do other activities.

“Every puppy should be trained to behave around livestock as we live in the countryside and every creature should be respected.”

• A farmer may legally shoot a dog only under certain conditions, including the lack of other options in an emergency or the fact that the owner can’t be found. Owners can be fined up to £1,000 for letting dogs “worry” livestock.