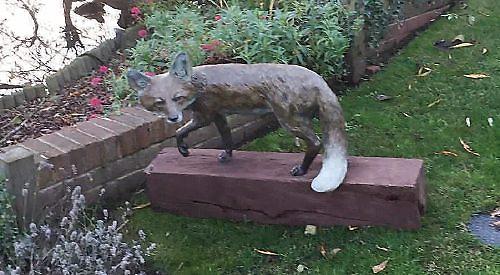 A BRONZE statue of a fox worth £4,500 was stolen from a riverside garden.

John Conlon discovered the 25kg figure was missing from his garden in Mill End, near Hambleden, after returning home from a trip abroad.

He believes the 2ft 6in long piece mounted on a log was stolen to order. He bought it from Watlington art dealer Sebastian Wylder more than two years ago.

Mr Conlon, who works in the mining industry, discovered it missing when he returned from Canada on Tuesday last week.

He said: “I was p****d off. I imagine they came into the garden by boat because I’m right on the side of the river. It would have been quite an effort to pick it up and move it because it’s quite heavy. It’s a big lump and they would have needed something to transport it.

“I noticed it was missing as soon as I got back. I called the gardener to see if it had been moved and he told me he noticed it had gone the day before. It makes you wonder if you can leave anything outside anymore. Fortunately, the thieves did not take anything else.

“I don’t know what you can say about the people who do this kind of thing. They are thieves and it’s just in their nature to do this.”

Mr Conlon said other larger pieces of art in the garden were not touched because they would have been too heavy to take without equipment.

He thinks the stolen piece could be sold to an auctioneer or another specialist. He said: “They were clearly looking to steal that specific piece. It’s a gorgeous bronze. I loved it when I first saw it and the sculptor had put a lot of effort into creating it.”

Mr Conlon, who has reported to the theft to the police, has CCTV cameras at his property even though he has been a victim of crime only once in 35 years of living there, when his lawn mower was stolen.

He said: “Then it was just a chancer who was coming by and saw it sitting outside. I’ve never really had any problems.”

Mr Wylder said the piece was made by David Meredith, a sculptor based in Leicestershire and was one of only 12. He helped install the piece and said he thought it was well hidden from prying eyes.

Mr Wylder, who is also a sculptor, said: “The world for these kind of pieces is quite small. Either someone has taken a fancy to it for their garden or they’ve stolen it for scrap because of the copper in it.”

Mr Conlon is offering a £400 reward for information leading to the recovery of the sculpture.  Email him on conlan@vex.net