Consistency is key for budding champion 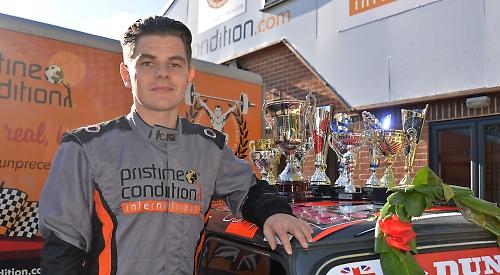 The 25-year-old, who drives for the Pristine Condition racing team, came first in two out of this season’s 14 races and placed second in another eight. He also ranked third on two occasions.

Budd, of Albert Road, is a media production editor for the health and safety training firm, which recently moved from Northfield End to the Centenary Business Park off Station Road. He has competed in the challenge for the past three years and came third last year.

He said: “We went into this looking for a win and it’s a pretty good feeling to have achieved that. It’s been a busy year but we were confident from the start and were on the podium in the first race. The key to our success has been consistency as we weren’t really outside the top five for the entire season. The guys on the team have given up a lot of their spare time in the evenings to help us out and we’re over the moon.

“It might be my name in the window but we wouldn’t have got anywhere without the help of the entire team. I’m incredibly grateful for the support and just excited about getting the ball rolling for next year.

“Hopefully we’ll be able to go out and win again. I’m feeling pretty relaxed about it — we’ve shown we can do it once so we should be able to repeat it.”