We drove across India in old saloon 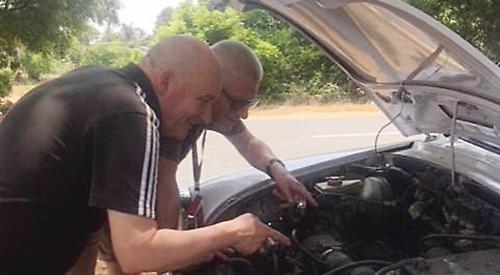 Chris Pengilly and Steve Belam, from Kingwood, and Kevin Rapson, from Emmer Green, were part of an eight-strong team that took part in the road rally from the east coast to the west.

The men took turns at driving an old Hindustan Ambassador, a four-door saloon car built in India, setting off from Chennai and arriving in Goa 11 days later after travelling through the provinces of Puducherry, Tamil Nadu and Kerala.

Mr Pengilly said: “It was an unbelievable experience but incredibly hard. This was no holiday. We were getting up at 6.30am to be on the road at 8.15am and some days we were driving for 12 hours.

“India is a nation of 1.2 to 1.4 billion people and everyone is just trying to survive.

“We arrived in a country of squalor. It was so dirty, it really was an eye-opener for all of us. India has got some of the most incredible scenery but there is no NHS and rubbish is just dumped everywhere.”

Mr Pengilly said many of the roads were in a poor state and their car — once described as “virtually indestructible” by former Top Gear presenter Richard Hammond — repeatedly broke down.

Another hazard was the unpredictable nature of Indian drivers.

Mr Pengilly said: “There are no rules. People drive on any side of the road they want and when they get to a junction or roundabout nobody stops. Despite that, we didn’t have one accident.”

In one small town, where a wedding ceremony was taking place, the men stopped to look at an elephant when they were approached by a five men who asked to have their pictures taken with them.

Mr Pengilly said: “They also asked if they could touch us.

“We were in the middle of nowhere and they had never seen white men before. In fact, wherever we went people wanted selfies with us. What wonderful, friendly people they were and they made us feel so welcome.”

The men were raising money for StepUp, a charity project in Uganda run by the International Refugee Trust, which aims to help communities to help themselves by educating people about health as well as democracy and government.

So far, they have raised more than £4,000. Mr Pengilly said: “Lots of individuals have donated, which is fantastic, and lots were following us on Facebook and Twitter, which was how we communicated.”

Some members of the team are already thinking about their next trip.

Mr Pengilly said: “There is another tour going from Turkey to Azerbaijan and a number of us have said we might like to do that next year.”

The team was supported by Rabbits Vehicle Hire, of Caversham, where Mr Rapson is managing director.