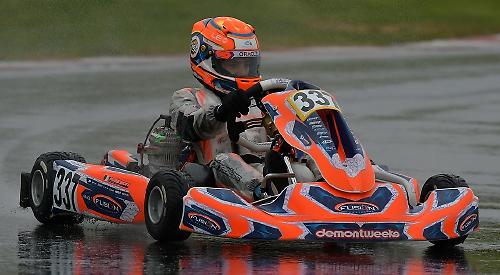 HENLEY’S Leo Robinson triumphed in rounds one and two of the LGM British Championship series at the PFI International circuit in Lincolnshire.

Twelve-year-old Robinson was consistently the quickest in testing and qualified on the front row for round one.

In tight racing the Lambridge Wood Road youngster won both heats, which earned him pole position for the final. Again the racing was close, with Robinson winning by a small margin. Round two was held on the following day with mixed grids. Robinson won two of the three heats and finished second in the other.

The final was held in wet conditions, which allowed Robinson to show his class. He started from pole position again, and drew steadily ahead of the field. Robinson’s winning margin at the end of the 15-minute final was 10 seconds.