Nissan's refreshing reminder of past glories 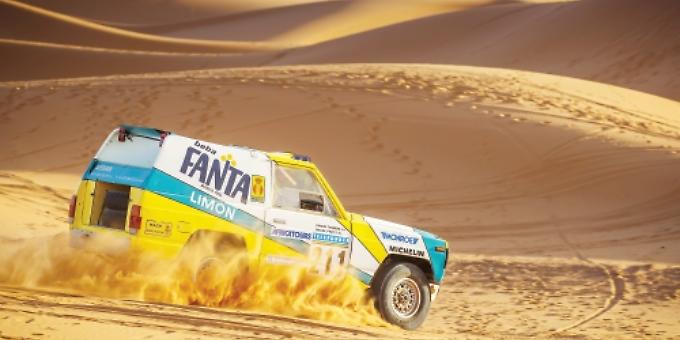 THERE is something irresistibly romantic about the Paris-Dakar Rally: the inestimable French capital, the beautiful desert, the ancient city of Dakar, old world capital of Senegal — what more could you ask for in the ingredients for an iconic motor sport event?

So it is a pleasure to report that after exactly 30 years away from the public eye, Nissan has brought one of its legendary motorsport machines back to life.

The 1987 Nissan Patrol Fanta Limon Paris-Dakar rally car has been restored and again made its presence felt in its spiritual home in the Sahara.

The Fanta Limon car was the first diesel car ever to finish in the race’s overall top 10, taking ninth spot. The car has been has been restored by engineers at Nissan’s European Technical Centre in Barcelona.

Previously languishing as a rusty wreck in a Spanish museum, the car was rebuilt by staff after work and at weekends.

Pedro Diaz Illan, a manager at the centre, is the only member of the original 1987 team still working there.

He said: “That was a proud moment. Our brains, hearts and souls have gone into this project and it has not been easy. But to see the car in the desert again was just fantastic.”

The story of the car’s success in the 1987 Paris-Dakar Rally starts the year before, when Nissan Motorsport decided to take part in high-profile off-road endurance rallies.

The base vehicle was to be the Patrol — Nissan’s popular 4x4 — with the team at Nissan Technical Centre Europe leading the project.

The sponsorship with Fanta Limon came through links between Nissan Spain and drinks giant Coca-Cola, which was looking to exploit the global publicity generated by the Paris-Dakar race.

Success came quickly, with victories in the diesel class in three events during 1986. But the main target was the Paris-Dakar. It began on January 1, 1987, with 312 vehicles lining up at the start of the gruelling 13,000 kilometre race through Europe, Algeria, Niger, Mali, Mauritania and Senegal.

Car 212 withdrew after rolling down a dune, but 211 battled on to the end. It was the first diesel to finish the race — in ninth place overall.

Mission accomplished, the cars were retired from racing. The whereabouts of 212 is unknown, but 211 was offered to the Salvador Claret, a private car collection and automotive museum south of Girona, Spain.

Which was where it remained for almost three decades.