New Vauxhall has got the '£' factor 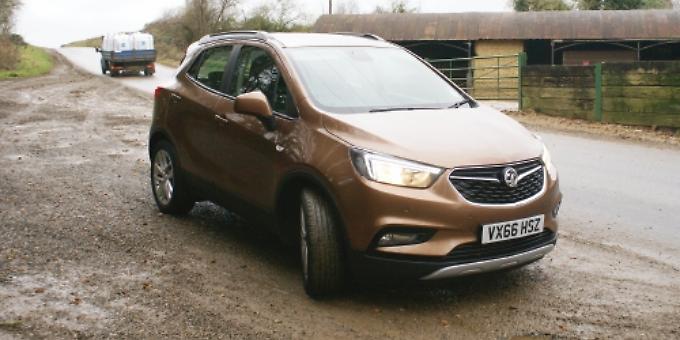 WHILE we have no way of knowing what the classic cars of tomorrow will be like, you can bet there will be a
Vauxhall among them.

This might seem an odd statement to make for such a workaday marque, but Vauxhall has a fine tradition of car manufacture that goes back more than a century.

I discovered while reacquainting myself with classic cars during the Christmas break that Vauxhall was indeed producing cars as early as 1903 — the company having been founded in 1857 as a pump and marine engine manufacturer.

As to any future claim as a maker of classics, there is a precedent. One “modern” example I found was a recent auction where a 1962 Vauxhall Cresta had an estimate of more than £5,000 — not bad for a car that was more than half a century old.

But what will aficionados in 50 years’ time make of the 2016 Vauxhall Mokka X? As promised in last week’s “Christmas in the Cotswolds” column, I have been driving the Mokka X with a view to finding out if it has that all-important X factor.

Well, while this car may or may not turn out to be a classic in years to come, I think with this certain X factor added — the X was launched at the 2016 Geneva Motor Show, though the Mokka first appeared in 2012 — it is evolving into a finely competitive car in a popular segment of the market.

This was always going to be a tough call. Actually, a few weeks ago I was driving one of its near rivals, which was also an accomplished medium-sized SUV (sport utility vehicle) that has definitely wowed buyers.

But here I think we have to factor in the price of the Mokka X. The X starts at around £18,000 (£19,515 for diesel versions). While that rival I mentioned — which shall remain nameless — did have a similar starting price to the Mokka X, the test car was nudging the £25,000 mark.

So if the Mokka X is going to prove competitive on price, then that’s a good start.

When I drove the car a couple of years ago I also wrote about a kind of “awkwardness”. However, I realised that this might have been the “high-ride” design factor.

I conceded that when you get your driver’s seat and steering adjusted to your own liking, this is a definite plus.

So for a medium-sized SUV you do not feel at all “low-down” on the road compared with much bigger SUVs.

The test car this week was the Mokka X powered by the new 1.4-litre Direct Injection Turbo (152PS) petrol unit. While I think I prefer the diesel version, this would be just a matter of personal taste.

The pull away with the 1.4-litre Direct Injection Turbo (152PS) petrol unit is snappier — and it takes a bit of getting used to that the engine is quite high-revving.

Of course, this comes into its own once you are on the move — and this Mokka X with this turbo petrol engine is nothing if not plucky and willing to perform.

There is plenty of room in the cabin and, though not luxuriously appointed, the ergonomics — as with most Vauxhalls apart from prestige versions — are perfunctory.

But this too can work well. After all, so much of what a car is about today is being functional — getting you from A to B without fuss and hopefully as economically as possible.

The combined miles per gallon figure for this car of 43.5 mpg I did not find particularly impressive, but then this is the way with any petrol-powered car.

Of course, you get better mpg with a diesel car of any description — and this is indeed the case with the Mokka X range.

However, there is a huge debate at present about the merits or otherwise of diesel-powered cars. Once they were — particularly in Europe — the engine power source of choice. But I think that is about to change radically in the next
half-decade.

Looking at the spec on this test car, it is hard to fault it on what you actually get as so-called standard features.

This car may or may not have the all-important X factor. But I have seen a great improvement in this Mokka X to the one I drove a few years ago. The only way to resolve the question is to take a test-drive yourself. You may or may not discern the X factor in this 2016 Mokka, but at least you can rest assured that as a new car buyer you have given the car your best shot.