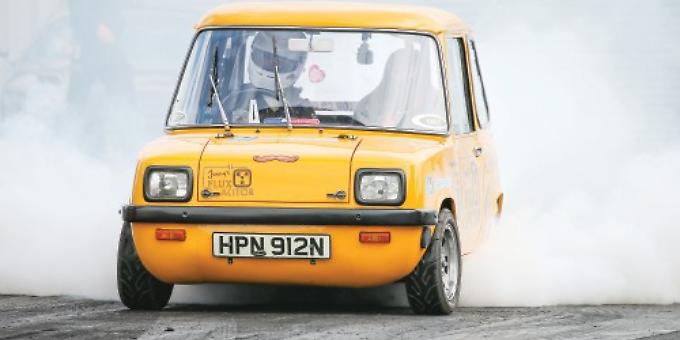 I ONCE got into a heated discussion with an executive at a car firm after unashamedly saying in a test-drive how much I had enjoyed hammering their electric vehicle.

In an electric car there is no need to wait for revs to build up before take-off because when you hit the accelerator hard you get instant full-on torque or pulling power.

This particular electric car would absolutely rocket from a standing start if you applied this questionable driving technique.

The executive argued — quite rightly, of course — that this was not what the electric car was meant for.

My subsequent experience in any electric car is to eke out the battery life you have and, like a mobile phone, not to forget to put it on charge. But it was great fun to stamp your foot on the accelerator and fly.

And indeed, the electric car is up there with traditional supercars when it comes to lightning-fast acceleration. As it happens, the world’s fastest road-legal electric vehicle, with quicker acceleration than many supercars, has gone on display at the National Motor Museum at Beaulieu.

The car joins the museum’s Driving Change display of motoring innovations and technology.

South East Electricity Board originally used the Enfield 8000 as a research vehicle, but the unassuming looking Enfield is a wolf in sheep’s clothing.

Producing an “electric” 800 bhp and more than 1,200 lb ft of torque from its twin DC electric motors, the rebuilt historic EV (electric vehicle) is a formidable drag racer with supercar-beating performance.

But it is completely road-legal and can be driven at normal road speeds.

Its owner, Fifth Gear presenter Jonny Smith, rebuilt the Enfield to show how fast an electric car could be and to challenge the public’s perception of EVs as limited and sluggish.

However, as the British-built Enfield’s original 8kW electric motor gave just 8bhp and a 40mph maximum speed, it has been completely re-engineered with the latest electrical technology.

The car’s drag racing name Flux Capacitor is a tribute to the time-travelling DeLorean in the Back to the Future films.

Smith said: “The essence of this project is about resurrecting a forgotten EV underdog and giving it some 21st century hot rod-inspired treatment, but with tongues in cheeks.

“I fancied building a hot rod electric car a while back, but rather than convert a piston-propelled relic why not remind the world that EVs aren’t a new invention?”

Discovered in a terrible state in 2012, with the original electrical equipment wrecked by flood water damage, the Enfield is now fitted with two DC electric motors rated at 2,000 amps — in stark contrast to the 150 amp rating of the car’s original electrical system.

As many as 188 lithium-ion cells — formerly used in a military helicopter — provide the power and are half the weight of the Enfield’s eight original 12-volt batteries, yet much more efficient.

Smith estimates the car’s new top speed to be in the region of 140mph, with a range of 50 miles between charges.

The car’s aluminium bodywork has been left unaltered, but the tubular steel space-frame chassis was modified to cope with the significant power increase.

Bespoke braking and suspension systems were fitted and a tougher Ford rear axle replaced the original Reliant part, while the tiny wheels were swapped for bigger Seventies slot mag wheels.

There is no gearbox — with the electric motors driving the rear axle directly.

The Enfield is not the only drag-racing electric vehicle. In America, John Wayland’s 1972 Datsun White Zombie is a well-known and fast electric-powered machine.

In the UK, Olly and Sam Young, who built up the electric motors for the Enfield, have created the Black Current Beetle based on a 1965 Volkswagen. It is the fastest EV in the world but, unlike the Enfield, is not road-legal.

Created by motorcycle and gun manufacturer Enfield, the 8000 Electric City Car was built in Cowes on the Isle of Wight, just a stone’s throw away from Beaulieu, between 1973 and 1976.

Smaller than a Mini, it offered a fume-free alternative to fossil fuel-powered cars during the 1973 oil crisis.

Its forward-thinking design included an on-board charging system, a heated windscreen and run-flat tyres, but its heavy batteries limited its performance and range, while its retail price was twice that of a Mini.

Of the 120 examples built, half were used for testing by electricity companies.

The record-breaker joins other electric vehicles in the National Motor Museum, including a 1901 Columbia Electric which was used by Queen Alexandra to drive around the grounds of Sandringham House, an electric 1939 Harrods delivery van, a 1985 Sinclair C5, and a new electric bicycle.

These fascinating machines demonstrate that electric vehicles have been around since the early days of motoring.

The Enfield 8000 can be seen in Driving Change as part of a visit to the Beaulieu attraction, which includes entrance to the National Motor Museum. Beaulieu is open every day except Christmas Day from 10am to 5pm. For more information call 01590 612345 or visit www.beaulieu.co.uk