'Super-smooth' Volvo gets my vote to succeed in US 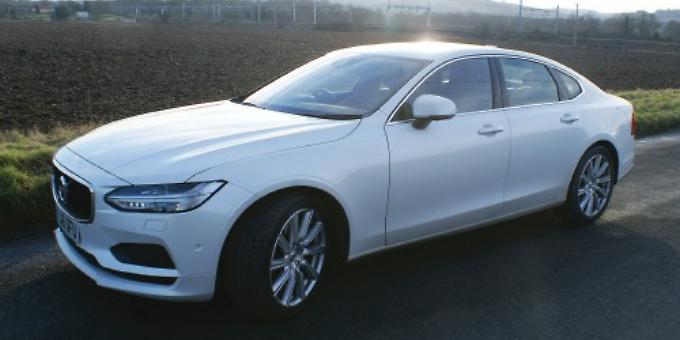 YOU might consider it intimidating to take delivery of a new car that has received nothing but high praise since its launch last year.

And you would be right. Usually, I like to drive a car before reading any opinions about it simply because I like to make up my own mind.

Today you would have to be living the life of a hermit to achieve this without coming across at least one random opinion on any given subject.

Most of social media may amount to nonsensical babbling yet car reviews, like any opinionated piece of reportage, spread like wildfire.

So the reputation of this week’s drive, the Volvo S90 D4 Momentum, surged before it like a bow wave before a powerboat.

It was no accident that Volvo chose last year’s North American International Auto Show (NAIAS) in Detroit to launch what it described as its new signature premium saloon, the S90.

Volvo is marching into the 21st century American market with a confident air. Its US car sales increased 24.3 per cent in 2015. The carmaker likes this market and its XC90 SUV (sport utility vehicle) was quite clearly designed to be a player in the ever-popular US SUV trade.

Let’s hope President Donald doesn’t trump any so-called “foreign” carmakers’ ambitions with another executive order among the current flurry, because Volvo wants to achieve great things there in the face of fierce competition.

“There are strong indications that Volvo is back on track in the US,” says Lex Kerssemakers, Volvo’s senior vice-president of the Americas. “We expect this strong sales momentum to continue, helped by the new S90.”

Volvo has invested heavily — 11 billion dollars — and in Charleston, South Carolina, will build its first North American production facility, employing around 2,000 workers (that at least should please Mr Trump).

When you fill in this kind of backstory, it becomes apparent why the S90 is such a super-smooth drive and a car bursting with technology. Not least of these are the safety features — a department of car production in which Volvo has shown exemplary form for decades.

The American market has always been hot on safety regulations and carmakers flout these at their peril.

But I wouldn’t think Volvo has much to worry about on that score. Indeed, this week comes news that Volvo is the first carmaker to score six points in the Autonomous Emergency Braking for Pedestrians (AEB Pedestrian) test and an overall five-star rating for safety innovation on the S90 and V90 estate.

The pedestrian tests by Euro NCAP are designed to check the performance of pedestrian-detection systems using three road-crossing scenarios, all of which Volvo says would result in a fatal collision if the AEB system did not intervene.

This is also good news for Volvo’s stated intention that no one should be killed or seriously injured in a new Volvo car by the year 2020.

With all that going for it, it might be assumed that driving the S90 around the humble highways of the Cotswolds might come as something of an anti-climax.

But as I have said before, although this type of super saloon is primarily aimed at business people, they make a great buy for private motorists. It was a simple pleasure to drive on both motorways and country roads.

And that’s the context in which you should view this car. Even though Volvo has announced that it is to introduce Skype for Business to its new 90 models, that surely should not put off private motorists.

I often Skype my eldest daughter, who lives in LA, from my desktop computer — but why not from the car (when safely parked up, of course)?

I don’t think that because saloon cars are a tried and tested (and even traditional) model form in cars that we should just be looking at hatchbacks, crossovers, medium to large SUVs and the like.

After all what’s wrong with a very comfortable saloon car, with ample room for five adults, huge boot space and every up-to-the-minute innovative safety, audio and technical feature going today? That’s why this Volvo S90 gets my vote.

The front-wheel-drive 190 hp D4 comes with an eight-speed automatic gearbox, and offers combined fuel consumption of 64.2 mpg and CO2 emissions of 116 g/km

l Pilot Assist: this automatically maintains a set speed or distance to the car in front, as well as giving gentle steering inputs to keep you properly aligned within your lane markings

l Sensus Connect and Apple CarPlay integrate your iPhone or iPad with the new centre display, allowing you to connect with the digital world

l The 360-degree camera makes parking and manoeuvring in narrow places a simple operation, providing a bird’s eye view of everything surrounding the car on the centre display