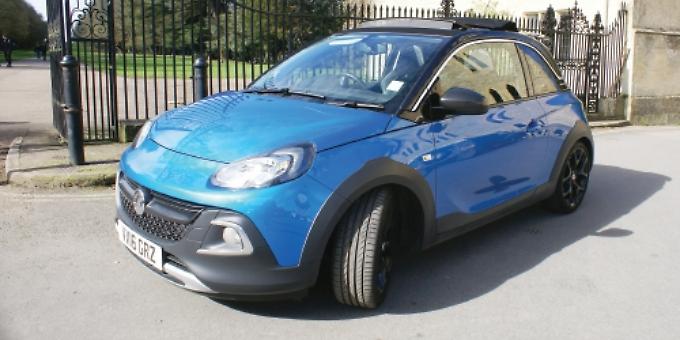 REST assured that I had no intention of doing anything undignified such as “getting down with the kids” while at the wheel of this week’s drive — the hyperbolically named Vauxhall Adam Rocks S.

On the other hand, I do not see why people of a certain age cannot enjoy what young motorists are expected to love — small, zippy motor cars — as we did back in the day with those early GTIs.

Today, GTIs are sportier, sophisticated versions aimed methinks at thirtysomethings clinging on to, well, something. (Could it be their youth? Surely not.)

The Vauxhall Adam Rocks S, I thought, might be aimed specifically at a much younger crowd — first-time drivers aged around 18 to 20.

But then I discovered a rather interesting marketing ploy of Vauxhall’s for Adam models back in a 2015 press release. There it cleverly aimed to make us — that is, most drivers — feel very welcome to Adam’s gang.

Thus, following the success of its young driver insurance offer on its Corsa model — which the press release said had been taken up by more than 1,500 customers — Vauxhall was offering the same “great deal to young Adam drivers to help lower the cost of motoring”.

In this deal, said the release, not only did drivers aged 18 to 20 get one year’s insurance cover for a one-off payment of £99, 21- to 75-year-olds (my italics) could get free insurance on most Adam models.

So after all we were in with the young crowd! Whatever was I worrying about?

Actually, as it happens, the Adam Rocks S that I have been driving has proved to be a very cheery experience, even for one of mature years such as myself.

I have no doubt that given a chance it could appeal to all ages and not be assumed to be a prerogative of the young.

Not once did I feel a twinge as we zipped along country lanes or cracked on along various motorways and demanding major roads at a respectable gallop.

This magic little car — with its frankly cute looks — was willing at every turn to respond to my driving demands of its 1.4 Turbo engine.

There was a singular muscularity about this car, too, for all its pretty looks. It was like one of those bullfrog-like women bodybuilders you see flexing their bronzed pecs.

And yet its colour — the nattily named “Let it Blue” (yes, really) — and overall finish — chunky alloys and smart rear roof spoiler, and superlative sunroof — also gave this Adam a dignity and road presence absent on other small and city cars.

The Adam is described as a city car but I don’t really buy that. Sure in its lower spec form it might excel around town.

The high-spec Adam Rocks S could easily be used to potter about the capital and, say, down the King’s Road in Chelsea, for example, you would be considered something of a city slicker — it looks that good.

But out on the road away from town and city this Adam Rocks S — with its ultra-comfortable Recaro sports seats and solid three-door configuration — is equally at home. Those sports seats will set you back an extra £1,620 as an optional extra. They were, I found, so dominant in the car’s cabin that it was easier to load and unload items from the back seat through the “back door”.

There is also a handy little boot. Not much room there, but I always think motorists make too much fuss about how much space they have.

Half the time, most motorists use the back seat as a preferred load space because they don’t like things banging around in the boot.

So if you’re in the market for a solidly produced small car — I do find Vauxhall in general has greatly improved build quality on all models — then the Adam could be for you. Whether or not you are in the mood to rock at the same time is, of course, entirely up to you.

You can check current Vauxhall offers at www.
vauxhall.co.uk/offers-finance