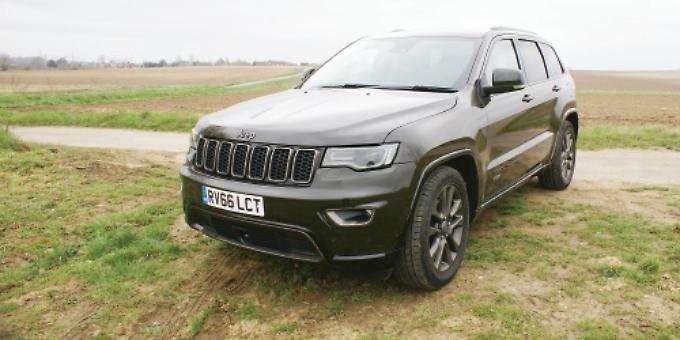 JEEP, the iconic American brand, is on a roll with an
all-new compact SUV (sport utility vehicle) launched at the recent Geneva Motor Show and best-ever sales in Europe in 2016.

The all-new Jeep Compass completes a model range and is sure to be a contender to be reckoned with in the growing compact SUV market in Europe and the UK.

Our friends in Europe love this smaller SUV segment — the most popular SUV of its kind on the Continent — so no doubt will be keen to try the new Compass.

In the meantime, I have been at the wheel this week of the big brother in the Jeep canon — the Jeep Grand Cherokee.

This car is big in every way — comfort, performance, looks — and not least big on the crucial issue of value for money.

I cannot believe that the test car, which was crammed with technology both for up-to-the-minute communication and off- and on-road capability came in at £52,635.

To the uninitiated any vehicle costing north of £50,000 might seem a lot of money to pay for a car — yet the Jeep Grand Cherokee’s top competitors would be hard-pressed to provide this level of high-spec SUV at this price.

Some of them go on into the stratosphere when it comes to a price tag, but I doubt whether any of them can match the Jeep Grand Cherokee as a consummate good buy.

I was impressed when I drove the Jeep Cherokee and said that it was “powerful and sophisticated with old fashioned virtues”.

Well, that was an SUV with a 2.2 Multijet engine, which provided a tough power base.

Step up a notch or two to the Jeep Grand Cherokee and you get a big bruiser of a 3.0 V6 diesel engine that has practically enough power to tow anything.

Depending on how you drive the Jeep Grand Cherokee you could achieve 40.4 mpg on the combined cycle (official figure).

I was pleasantly surprised by its economy for such a large vehicle and after two separate 130-mile round trips it still had half a tank of fuel left. With 250hp maximum power available from the 3.0-litre V6 turbo diesel engine, the Jeep Grand Cherokee can accelerate from 0-62 mph in 8.2 seconds and has a top speed of 126mph.

But performance and economy aside — you don’t buy the largest kind of SUV with super-economy in mind — it was the sheer scale of excellent standard equipment and technological features that I found so impressive about the Jeep Grand Cherokee.

Actually, I have been driving the Grand Cherokee 75th Anniversary version, of which just 125 examples have been made available in the UK.

To celebrate its 75 years of history, Jeep has introduced a 75th Anniversary special edition offered on all models of the line-up.

Powered by the 3.0-litre V6 MultiJet 250 hp engine, it is paired with excellent eight-speed automatic transmission and the Quadra-Trac II 4x4 system.

Four colours were made available for this special 75th Anniversary car in the UK: exclusive Recon Green (the colour of the test car), Bright White, Brilliant Black and Granite. A Night Eagle special-edition model was on the agenda at the recent Geneva Motor Show.

The design of this version of the Jeep Grand Cherokee gives the vehicle “a more aggressive flair and sporty appeal”, according to the manufacturers.

The “blacked-out” theme that distinguishes the Night Eagle series was launched in the past two years on Jeep Cherokee and Renegade models, and is now coming to the Grand Cherokee and the Wrangler.