Alhambra comes with a high degree of comfort 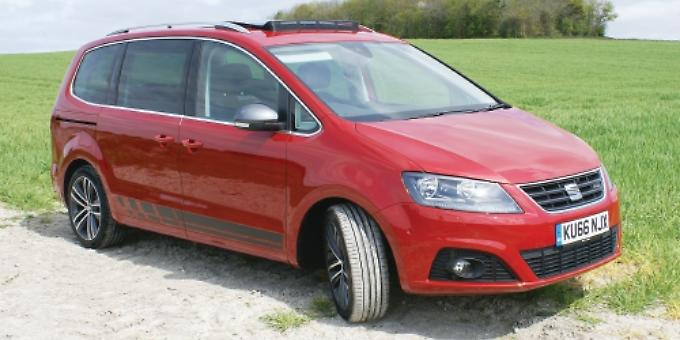 THERE was a time when the people’s car meant just that – a car built with people in mind.

So the so-called people mover or MPV (multi-purpose vehicle) was born with the aim of transporting mainly families in comfort and safety.

The accent was on space, so the car makers created MPVs that could seat up to seven people plus luggage – the right formula for holidays, school runs and activities.

These days the MPV has been usurped by other configurations of the people mover. These are called large and medium sized SUVs (sport utility vehicles).

This week’s drive, the Seat Alhambra FR-Line 2.0 TDI, has to a degree been put on the back foot by this desire for a new style of smaller family transport.

Indeed, the excellent new Seat Ateca, a medium-sized SUV, which I wrote about recently, is the kind of car that more car buyers are inclined to go for these days.

That is not to say that MPVs such as the Alhambra have had their day. There is still plenty of life in the people mover but I think its designers have to seriously consider motorists’ preferences in future.

However, at least as far as the “professional” motoring business is concerned, MPVs remain in demand.

Where would your average airport run be without a stylish MPV such as the Alhambra ferrying flying customers to and fro?

In the Cotswolds, for example, MPVs are ever popular with chic hotels for guests who are looking for tours in a vehicle other than in a 60-seater coach.

Awards tell us something if not all about a car’s success. While the Seat Ateca has added the Best Mid-size SUV trophy at Fleet News Awards, the Alhambra picked up MPV of the Year at Professional Driver magazine’s Car of the Year awards.

So there is no doubting the all-round durability of the Alhambra in what has been a fiercely contested segment for years.

Seat itself is on a sales high at present. The Spanish car maker, which is part of the Volkswagen Group, says that new car registrations reached “unprecedented heights in March and the first quarter of the year”. Seat saw 11,200 new cars registered in March, an increase of 29.1 per cent on the same period in 2016.

So what is the 2017 Alhambra? It is a full size, seven-seat MPV that combines flexibility of use with what Seat calls “sporting character”.

There is a choice of three engines aimed at combining performance with efficiency.

The most frugal, the 2.0 TDI CR with manual transmission, achieves 50.4 mpg on the official combined cycle, while emitting 146g/km of CO2.

As a result, this Alhambra bears the Seat logo for low-emission models – E Ecomotive. Alhambra models are equipped with the Auto Stop/Start and Brake Energy Recovery systems.

The Alhambra has handy, long, sliding rear doors – which are available with electric operation in SE Lux spec. These offer easy access to all rear seats.

The luggage compartment holds 2,297 litres, almost 2.3 cubic metres, when the second and third rows of seats are folded. However, if all seven seats are occupied, I have found MPVs wanting for luggage space.

With the new EasyFold system the second and third row seats can be retracted into the vehicle floor. Integrated child seats are available as an option.

Seat offers a range of technologies for the new Alhambra – some as optional extras.

They include the optional bi-xenon headlamps with cornering function. There is also Park Assist that steers the Alhambra into parking spaces – both parallel and perpendicular to the road.

A three-zone climatronic system – standard across the range – guarantees comfortable cabin temperatures regardless of seating position.

I found the high degree of comfort while driving the Alhambra a definite bonus and a luxury you do not always experience in the newer, more compact SUVs.

The Alhambra is available in trim levels S, SE and SE Lux – all three with a range of standard equipment. Further, an extensive safety package incorporates seven airbags, including a driver-side knee airbag, child locks on the rear doors and ESP stability system complete with trailer stabilisation function and tyre pressure monitoring.

While more compact models are bound to challenge the MPV in coming years, there is no doubt that they will have to match the comfort and durability of cars such as the Seat Alhambra.