Super-smart V90 Estate that cries out 'Drive Me' 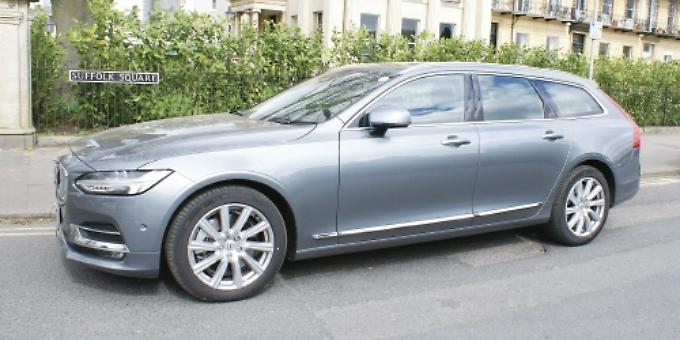 BY their nature, human beings are not infallible — a fact that Swedish carmaker Volvo acknowledges in its current TV advertising campaign.

Yet Volvo deliberately tags its new ad with the legend, “Human Made” because the carmaker is well aware that ultimately we as humans are responsible for amongst other things safe driving in cars.

As the essence of human endeavour is comprehension, Volvo goes on to say in the ad: “First we understand, then we make.”

This could all be dismissed as copywriter’s hyperbole and may not mean much to the average motorist.

But of all the car manufacturers in business today, it strikes me that Volvo now has the wherewithal and the money (courtesy of Chinese umbrella ownership) to put into practice a car-making philosophy it has adhered to for decades.

And you could certainly be forgiven for getting a bit philosophical about the future of cars behind the wheel of this week’s drive — the new Volvo V90 estate.

The V90 — and its sister model the S90 — is consummately modern car manufacture at its best.

Price-wise, such a car will not be available to all, of course, but there is no doubt in my mind that this is a fine example of how cars should be presented to the public in the early part of the 21st century.

On safety, on comfort, on performance, on sheer execution of good design and manufacture, Volvo stands out.

And most important of all they do not forget us. Not just drivers but passengers, too — everyone travelling in any new Volvo matters. Remember, too, that Volvo is one of the leading carmakers that will soon give us “driverless” cars.

In Sweden at this time, Volvo is recruiting people living in Gothenburg to take part in Drive Me — its research project on autonomous driving.

Well, all this gets my vote, and unsurprisingly so does the new Volvo V90 estate.

Perhaps the standout feature of this car is the capacious touchscreen than dominates the dashboard.

This is where the driver accesses everything to do with the running of the car, including the owner’s handbook.

Suffice to say that for some this kind of technological sophistication will prove a bit of a challenge.

But if I was buying a V90 — or any other new car for that matter — I would insist of having a full “teach-in” by the experts, be that a car salesman or a technical adviser.

If you are paying around £40,000 for what is a very accomplished car then you want to know exactly how it works.

Even if you don’t want to get under the bonnet — and motorists rarely do these days — then at least you need to know how to operate its moving parts.

So the V90 features a 360-degree camera that gives a high-resolution bird’s eye view of the area surrounding the car. The system uses four cameras — two at the door mirrors, one at the front and one at the rear. By touching the camera images on the centre display touchscreen, you can get a view from just that camera.

The rear camera can also be switched to a zoomed-in view close to the car, particularly when hitching a trailer.

My old friend, BLIS — which keeps a safety eye out for you while driving — alerts the driver to vehicles in your left and right blind spots and providing steering assistance if needed.

When a vehicle enters your blind spot or approaches rapidly in a lane on either side of your car, BLIS can alert you via a light in the left or right door mirror.

If you don’t react to the warning and start to drift into the path of another vehicle, the Steer Assist function gently helps you back into your lane.

The rear-mounted radar sensors continuously monitor your blind spots and a large area behind your car, day or night, and react to almost any type of vehicle — including motorcycles.

Wisely, Volvo points out that “the driver is always responsible for how the car is controlled” and that these safety aids are “only supportive functions”.

Park Assist Pilot takes over the steering and guides your car into place, whether you park in a parallel or perpendicular space — all you need to control is the brake and the accelerator. The technology is so precise it can park in spaces you wouldn’t normally consider: when parallel parking, even a gap just 1.2 times the length of the car is sufficient.

For someone of let’s say advanced years, Volvo’s most advanced LED headlights featured on the V90 are a must for night-driving.

They provide exceptional light, help you see through corners and optimise your vision without dazzling others by constantly adapting the light pattern.

As you steer, the headlights turn to illuminate the curve ahead. LED illumination allows you to enjoy high beam with even greater radiation and range.

You can stay on high beam all the time — when you meet or catch up with another car, the headlights shade out just as much of your beam as needed to not dazzle the other driver.

The headlights are intelligent too: the high beam shuts off when you enter a city but if you drive past an illuminated sign it stays on.

And facilitating low-speed manoeuvring and reversing in the dark, they turn up to 15 degrees as you steer to illuminate the area close to the car.

City Safety detects vehicles that are stationary or move in your direction, as well as pedestrians, cyclists and large animals — day or night. City Safety supports you with audible, visible and brake pulse warnings when needed.

All in all, this new Volvo V90 for me proved another highly satisfactory drive. I hope this is the real shape of things to come in cars.

l Pilot Assist, Volvo's semi-autonomous drive technology that can take care of the steering, acceleration and braking up to 80 mph, is also standard on every V90