This SUV for all seasons is lacking trademark zip 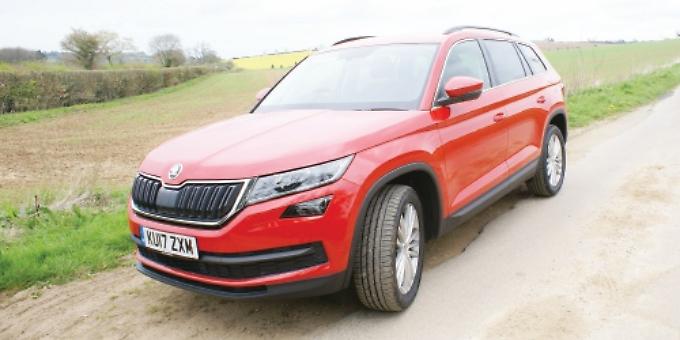 MY regard for Škoda is very high these days, since the Czech carmaker long ago shrugged off a sullied image many years in the making.

Today, Škodas are — under the mighty Volkswagen ownership umbrella — improved to the point of its former reputation being unrecognisable.

Therefore my expectations are similarly high when a new Škoda model is launched.

The Škoda Kodiaq SUV was inspired by the smoothly designed VisionS concept car at the 2016 Geneva Motor Show.

So there is nothing wrong with the Kodiaq’s design — in short, it looks the part of a 21st century SUV (sport utility vehicle).

Strong, solid lines depict a car for all seasons — one that would be as at home in the (occasional) slush of a British winter’s snow or an off-road ramble through a rain-soaked forest.

But in effect it is this very sturdiness that surprised me when I got behind the wheel of the new Kodiaq.

There is no diminution of power from the car’s 2.0 TDI (diesel) engine, coupled with the excellent seven-speed DSG 4x4 (automatic) transmission.

Though there are two diesels available — the test car was the less powerful of the two — you might be better served going for the more powerful diesel version even at the expense of miles per gallon.

And of course, this kind of guttural power is needed when you go off-road or are towing (I can see the Kodiaq scoring heavily with caravan fans).

However, what I have really liked about the Škoda model range is that in each car, big or small, from the city-wise Citigo to the ever-impressive Yeti, there is a great willingness to perform.

I know the Kodiaq is an SUV — a 4x4 that has to be tough to go off-road when the occasion demands it. But I would have liked to have experienced a little more lightness of being in the Kodiaq as a road car.

Maybe it was simply that I have been used to the lovely zippiness of the various Škodas that I have reviewed in the past? Interestingly, there is the Škoda Kodiaq Sportline coming, which had its world premiere at Geneva in March this year and is described as a “dynamic variant” of Škoda’s new large SUV.

I would like to test that new car and report back. I think this sportier model might appeal more to buyers who, let’s face it, would like an SUV with good off-road capability if needed but are likely never to venture
off-road.

I believe there are thousands of motorists who love the idea of an SUV with strong 4x4 capabilities but really want to be first and foremost comfortable on the road before they go off the beaten track.

There is great use of space in the Kodiaq — with seven seats available when you want a full complement of driver and passengers.

Then when you drop the two rearmost seats a large 2,065 litres of load space reveals itself.

Škoda says that the Kodiaq, though just 40mm longer than the Škoda Octavia — which I found highly successful, especially in estate form — “offers a larger-than-average interior for the SUV segment”.

And true, you are immediately aware of the “bigness” of the interior, which has to be a considerable plus.

Here there are useful storage compartments, too, some of which can be air-conditioned (useful for chilling refreshments on any journey).

I have always been a fan of Škoda’s so-called “Simply Clever” features “designed to make life on board even easier”.

In my view, the plastic clip on the inside of the windscreen to display paid parking tickets should be compulsory on all cars!

More than 30 Simply Clever features have been integrated into the Kodiaq, seven of which are new.

These include a door-edge protection system that deploys automatically when opening the door. When shutting the door, the trim folds itself back in. Škoda Connect makes its debut on the Kodiaq and is divided into two categories: Infotainment Online and Care Connect.

The former provides live journey information and real-time navigation details, while the latter delivers remote access as well as assistance.

The Kodiaq has a range of driver-assistance systems including Area View, which uses wide-angle surround-view cameras to create a virtual, top-down view and 180-degree images to the front and rear.

The Kodiaq is available with five engines — three TSI petrol units and two TDI diesels. Capacities range from 1.4- to 2.0-litres, with output ranges from 125PS to 190PS.

Luggage capacity up to 2,065 litres

Two and four-wheel drive options; DSG transmission on most models