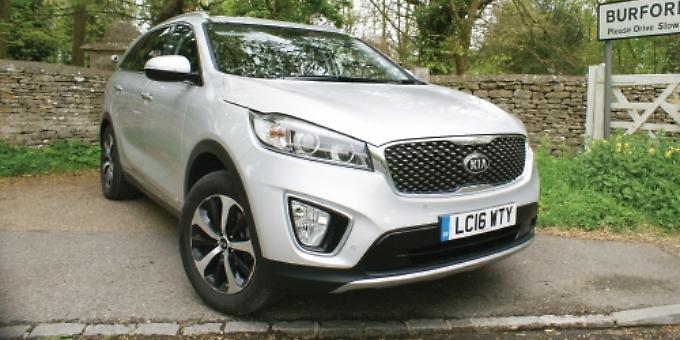 THERE is a new Kia Sorento on the way — though it is not expected to see any “major changes on the 2017 model model”, according to one avid American Kia blogger.

Our friend in the US — at the www.kia-world.net blog — says the 2018 model year will see a “refreshing” of the model and “you can expect the Sorento to gain some styling tweaks, as well as powertrain enhancements”.

Well, that strikes me as the least we can expect to see from a new 2018 Kia Sorento.

Meanwhile, I have again been driving the 2017 model just because I like the car and wanted to drive and write about it once more.

When I first experienced the Kia Sorento in July 2015 I was effusive in my praise. I likened it to “a matinée idol” of the Cary Grant or George Clooney ilk.

What impressed me most about driving the Sorento that summer was that this new third-generation “flagship for Kia in the UK” was a formidable improvement on its predecessors.

Now with Kia we have learned that this is not a car company to mark time or indeed rest on its laurels.

Take the hugely successful Kia Sportage. No sooner did it become a bestseller than Kia set about producing another even better model Sportage.

So while I have, like our American blogger, high hopes for the new Sorento, I think the one that emerged in 2015 should still be highly rated (and no doubt a great residual buy).

But this recent drive revealed a strange thing: I actually felt that the one I tried two years ago felt smoother, more sophisticated and a smarter car all round.

So why did the first car feel better? Because that was all it could have been — an instinctive reaction to driving the same model that made no real sense.

I said in 2015 that when I “got behind the wheel of this SUV it feels like you are about to experience a long, luxurious drive”. And so it proved to be. This time around I experienced that same level of comfort: black leather upholstery, the sliding and reclining front seats, the heated steering wheel and front seats — all the trimmings of a big, luxury SUV.

In fact, on the Sorento there are four trim grades: KX-1 to KX-4. As I have said, on both occasions I have driven the KX-2.

Top of the range is the KX-4, which is said to have “even more per square foot of comfort zone”.

Maybe I should try the KX-4. However, I believe that what might be at the root of my anguish over the “differences” between these same specification cars was simply the colour.

Yes, the cars were different colours. Now you may think that sounds daft but a car’s colour is paramount.

And it was clear that the colour of the first Sorento I tried held sway over the most recently driven one.

The latter Sorento was, I believe, White Pearl. Buyers can have clear white or opt for one of four metallic colours: Midnight Black, Satin Silver, Graphite or White Pearl.

The first Sorento I drove appeared in handsome metallic Graphite that obviously appealed greatly to me. The lesson here is clear for car buyers. Not only do you have to be sure that the specification of the new car you are considering buying is absolutely the one you want — engine, trim, on-board technology — you also have to be completely “sold” on its colour.

By the way, if you are considering buying a Sorento bear in mind that our US Kia blogger is sure that Kia will “definitely upgrade” trim levels and “exterior colour options”.

Lastly, let me give you a little detail on the current Sorento. It is powered by a 2.2 turbodiesel engine that produces 149g/km emissions and (officially) delivers 49.6mpg (combined cycle).

Seven seats are standard across the line-up and when the back seats are not in use they fold flat into the floor, allowing for greater boot space.

The Sorento was awarded the maximum five-star crash safety rating by Euro NCAP. It was praised in particular for a passenger compartment that remained stable in the event of a collision, with good protection for passengers.

All passengers were well protected from whiplash, while pedestrian impact was aided by the Sorento’s active deployable bonnet.

Safety technologies include: ASCC (Adaptive Smart Cruise Control); LDWS (Lane Departure Warning System), which emits an audible alert when the driver strays from the chosen lane without using indicators; BSD (Blind-Spot Detection), with a visual warning in the door mirror when another car is in the driver’s blind spot; and SLIF (Speed Limit Information Function), which displays the speed limit in the driver’s instrument cluster based on cameras detecting roadside signs.