From granny's favourite to a 21st century city car 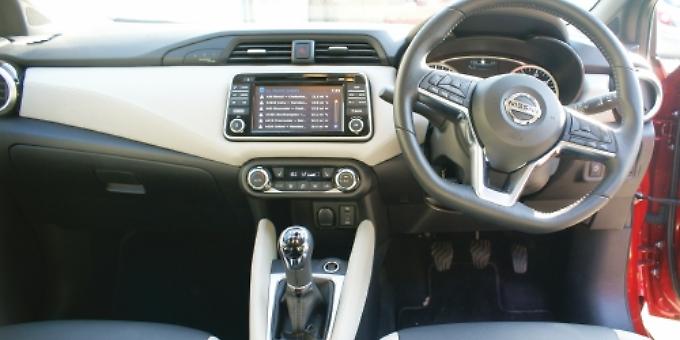 EXCELLENT all round — that’s my unequivocal verdict on this week’s drive: Nissan’s New Micra.

This completely new small car is a highly successful exercise in reinvention.

If you think the Micra was solely your granny’s car of choice then think again.

The 2017 New Micra — classed as a city car — is simply a revelation and nothing like its predecessor.

The new car disproves any theories that tried-and-tested models cannot break out of their crusty old mould and be completely changed for a new lease of 21st century life.

And I mean completely changed: there is virtually nothing about the New Micra other than its name badge that you will recognise if you know the old model.

This is all to the good — it means that good design is not dead in the car industry.

True, there are an alarming number of modern cars of various brands that are similar in design.

But the New Micra shows that with thought and some considerable flair a great little car can be reborn.

And I understand completely that the New Micra is now firmly part of the Nissan “family” of models.

It could be argued that it looks like a mini-me version of the ultra-successful Nissan Qashqai — again, not a bad thing.

For all car makers must have realised that it is better economically and stylistically to create cars that look as if they “belong” to a family all the way through the model range.

So the outside design of say, a city car — its grille, its roofline and rear shaping — has a lot in common with its large SUV (sport utility vehicle) big brother of the same make. The New Micra also has super finishing. The test car I have been driving was turned out in elegant Passion Red with 17in black alloy wheels.

But what was also remarkable was its performance, which all centred on an excellent little engine called a 0.9I IG-T 90.

In fact, the New Micra is available with three engines — two petrol and one diesel.

All engines at the launch of the New Micra are linked to a five-speed manual gearbox. (Other engines and an automatic transmission are planned later on.)

I found this five-speed gearbox smooth and excellently engineered to maximise the best combination of performance and economy in the New Micra.

The combined cycle on the test car was 61.4mpg.

Of course, as primarily a city car it would notionally be at its best in built-up areas. But I found the car more than willing to perform on motorways. There is a limit to its punch on big roads but it is nothing if not up for it.

I jotted down what I really liked about this car apart from its looks, engine and economy described above.

Inside, it had an absolutely “banging” stereo system — I think that describes accurately its top-class Bose Personal premium audio system, apparently a first for this type of car.

It has beautiful sound thanks in part to two speakers located in the driver’s seat headrest. The system has just six speakers — Nissan says for the New Micra it wanted to achieve “quality over quantity”.

Bose Premium audio is standard on New Micra Tekna, and an option on Acenta and N-Connecta grades.

There was a useful, deep glove compartment (so often this is too small even in larger cars); there are numerous cup or bottle holders that are well placed and do not interfere with driving (you would be surprised at the number of cars where these get in the way of the driver).

There was a USB port with iPod connection, an auxiliary socket for MP3 player, but there was also an AM/FM/CD audio system with DAB digital radio (linked to NissanConnect, the seven-inch touchscreen navigation and entertainment system).

You cannot imagine how this combination is literally music to the ears of someone with a well-loved CD collection.

Faced with the recent hot weather, the air con system proved to be very good. And on wintry days to come this is a city car with heated seats, which always gets my vote.

The Nissan Micra has been the budget car of choice of a great many motorists over the years since its original launch way back in 1983.

The 2017 all new Nissan Micra proves that an old warrior can be revisited, reshaped, reformed and, I predict, become a bestseller all over again.