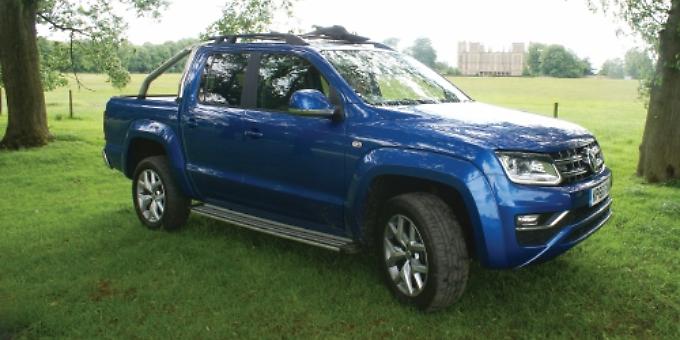 LAST summer I wrote an occasional series on road trips that took in great places to visit in Britain and those easily reachable by car.

This culminated in an excellent foray into Wales along the A40 (without once driving on a motorway).

On one of those trips north, though, I had some unfinished business.

Last June we drove to Hardwick Hall, an impressive pile which has looked down benignly upon a Derbyshire valley for more than 400 years.

We marvelled at the house but a typical summer deluge prevented us from seeing the gardens, which we had been told were equally impressive.

This road trip works out at 123 miles from my home in Gloucestershire and a similar distance from Henley (with an overnight stay).

The vehicle I was driving was singularly appropriate for tackling a large country estate.

The Volkswagen Amarok is the consummate “work-oriented” sport utility vehicle pick-up — but with a difference.

From launch this particular SUV has struck me as being much more than just another updated and upgraded working man’s pick-up. This is simply because it is not.

The Amarok is a great combination of the traditional structure of a large pick-up, combined with the best modern attributes of a large luxury SUV.

More about the Amarok, which recently underwent significant changes, in a moment.

The National Trust has owned Hardwick Hall since 1959. While I am no expert on stately homes, my experience is that sometimes I find the gardens disappointing.

The main reason for this, I assume, is that gardens restored to their original splendour require a lot of labour-intensive work and continual commitment.

The gardens in Hardwick Hall stand testament to a truly impressive amount of care to achieve the beautiful display we witnessed on our visit.

In the charming stumpery, blue and purple iris mingle with snowdrops in decaying tree roots; croziers of ferns unfurl through leaf mould; bees were everywhere.

Daffodils were in profusion: they filled wild borders planted by many primary school visitors over the years.

The scent of hybrid musk roses in the borders of the East Court, between yew buttresses, filled our heads.

Even a walk through the orchards — too early for significant fruit — was a spring treat.

The road to Hardwick Hall is not an easy drive and takes in some of Britain’s busiest motorways and A-roads — the M5, A42, M42 and M1.

But the Amarok, as one would expect, took to the trip with a relish. This is a big vehicle and not for the faint-hearted. I found it a thoroughly rewarding drive.

I took photographs of the Amarok in a setting where it looked very much at home — with a stunning backdrop of Hardwick Hall. The Amarok made its European debut at the 2010 Geneva Motor Show. With a dash of romance from an icy, unforgiving environment, it takes its name from the Inuit word for wolf.

And I reckon the Amarok would be more than up for taking on glacial or if need be extremely hot landscapes.

The 4x4 double cab pick-up was, says Volkswagen, “designed to set new standards in the sector and have a global appeal”.

So the new model, which has been available to buy in Britain since the end of 2016, is powered by a 3.0-litre V6 TDI engine that replaces the current 2.0-litre TDI engine. This makes the Amarok the only six-cylinder model in its market segment.

A big vehicle to haul around, yet official figures claim 37.2mpg from this tough diesel-engined SUV.

This is thanks largely to standard Volkswagen BlueMotion Technology modifications that include stop/start, battery regeneration, and modified engine design: CO2 emissions are put at 199 g/km.

The new Amarok distinguishes itself from the previous model through new front bumper and radiator grille design — including front fog lights, new alloy wheels and a third brake light with LED technology.

Inside there is an all-new dash panel design which incorporates Volkswagen’s MIB infotainment system with touchscreen, radio, navigation and new technology including the option of CarNet and App Connect systems. Bluetooth is also now a standard feature.