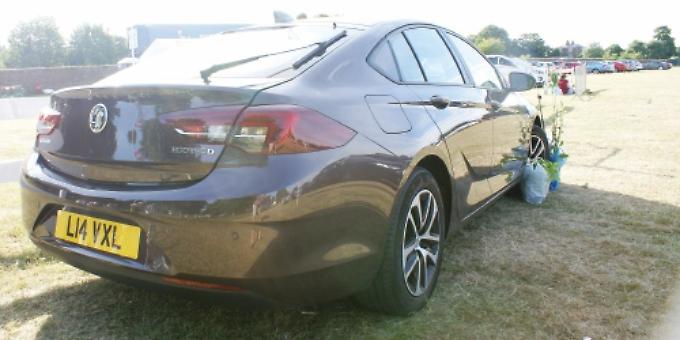 AS is becoming more obvious each year, new cars did not figure greatly last week at one of the world’s top-class summer events.

This was because most of the visitors had one thing on their minds — the glorious pastime of gardening.

I imagine that the last thing they were thinking about were cars. Yet the car parks at the Royal Horticultural Society’s 2017 Hampton Court Palace Flower Show were, as they say, “rammed” with vehicles all week long.

Carmakers now seem to stay away from this event — presumably choosing to indulge sponsorship budgets elsewhere.

The only visible cars inside were old ones decked out with plants and flowers.

Which, I admit, surprises me. After all, every July this show — the biggest anywhere of its kind — attracts more than 125,000 visitors, not just from Britain but from around the world.

The Royal Horticultural Society (RHS) had helped pupils from Whitechapel to grow plants in the run-up to the show. These are wonderful down-to-earth innovations that still can shine through a show that has become increasingly sophisticated.

I hope the organisers will not lose sight of this ethos of gardening as a means of inspiration for all as the burgeoning commercial side of the show continues apace.

Of course, the stylish gardens were paramount and the show did not disappoint.

Most impressive of all, I thought, was in a category I would not normally find satisfactory.

Conceptual gardens, like concept cars at motor shows, often leave me cold. Yet the “Elements of Life” conceptual garden designed by Bill Wilder, which sat on a large water tank, had an intriguing subterranean feel to it. The garden itself looked as if it were suspended in mid-air.

The journey to the show was a good testing ground for this week’s drive — the new Vauxhall Insignia Grand Sport. The reason for this was that you probably could not have designed a more varied route to this event on UK roads.

From my home in the Cotswolds it takes in a 190-mile round trip, during which you encounter just about every conceivable type of road and traffic condition.

This includes a 20-mile drive on a hectic dual carriageway; a sustained period on a motorway (M4); and a stop/start traffic-congested trawl around Heathrow into the Hamptons.

Finally, motorists get a few hundred yards of mild off-roading on grass in this large country estate that was once a retreat of Cardinal Wolsey and later Henry VIII.

The Insignia Grand Sport is an interesting car. It spearheads a determined effort by Vauxhall seriously to compete in the world of prestige sports saloons while at the same time keeping the car affordable.

Indeed, the new Insignia range starts at nearly £1,500 less than the entry price into the outgoing line-up.

To some extent, with the Insignia Grand Sport, I think Vauxhall achieves its goals of affordability and producing a better car.

Yet I think there is still room for improvement if everything to do with this new Insignia points to an upmarket strategy. Vauxhall actually says the car “competes with premium marques”.

Certainly on the money side, with a sports saloon such as this test car Insignia Grand Sport costing around £21,000 with options added you would have thought it would make it a contender.

But is it enough? And would potential customers in fact be prepared to pay more for a competitor to get those extra premium benefits that count? Vauxhall says with more space than before, and smoother design lines, the car does compete with the premium marques.

Then there are the features the Insignia Grand Sport offers, such as automatic emergency braking, IntelliLux LED Matrix headlights with 32 elements, new OnStar services to facilitate hotel booking and parking, Bose sound system and systems like Apple CarPlay and Android Auto.

The new Insignia is designated Grand Sport in its five-door form. The Insignia Grand Sport will also be available as the Insignia Sports Tourer and Insignia Country Tourer estate car.

I found the seats on the test car lacked the kind of adjustments and “extras” — controllable lumbar support, for example — that you would expect to find on any premium marque.

This particularly applied to the front passenger seat (carmakers need to think about everyone who travels in their cars). Surely on what is described as a “luxury” car, this kind of equipment should be standard?

From the outside, the Insignia Grand Sport is a good looking car. And its Dark Caramel colour was attractive. In fact, the colour was spot on — especially for a car trying to elevate itself into the premium range.