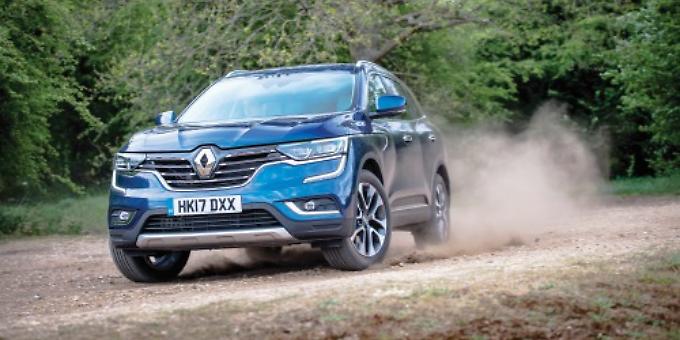 I GUNNED the vehicle as hard as I could up the steep rutted track in dense woodland on an Oxfordshire country estate.

Halfway up the track as the incline increased dramatically the vehicle began to lose traction until, with the wheels spinning madly and no longer able to grip, we came to a shuddering halt.

A quick flick of a switch on the cabin console to four-wheel drive and we pulled smoothly away and reached the top of the hill.

This exercise in how two-wheel drive differs from four-wheel drive was part of Renault’s UK launch for motoring journalists of its all-new Koleos SUV (sport utility vehicle).

You kick off in conventional two-wheel drive, then lose traction, so you switch over.

And with all four wheels powering the car simultaneously, you are back in business.

That’s if you ever venture off-road, which is always a subject for debate about motorists who buy large SUVs.

No matter, it may well be that you just want the security of such a large vehicle around you — and you would get that with the Koleos.

The Koleos is the big brother of the French car maker’s new trio of SUVs and crossovers. The other models in the line-up are the Kadjar, which I reported on recently, and the all-new Captur, which I hope to write about soon.

First unveiled at last year’s Beijing Motor Show, Renault says the Koleos offers the “rugged capability of an SUV with the elegant refinement of a large executive saloon”.

It comes with five seats only — to offer more space for both front and rear passengers. Those requiring seven seats are able to consider the Grand Scénic.

The aim with the Koleos is to offer exceptional interior space for both driver and passengers.

I have to say that after driving a good few miles in the car last week, it feels every inch the luxury SUV at a reasonable price (starting around £27,500 on the road).

For those who will combine off-road driving (there are grab handles either side of the centre console) with everyday motoring, there is a range of accessories available.

These include a fully integrated sill extension pack, door and boot sill guards, a removable tow bar (no tools required), a range of roof-mounted carrying accessories including QuickFix aluminium roof bars, and a choice of boot organiser and load protection accessories.

The Koleos provides an impressive comfort zone that you’re aware of as soon as you take your seat, whether as passenger or driver.

Depending on the version, the front seats come with six-way power adjustment, lumbar adjustability, heated cushions and seat backs and integrated ventilation and a panoramic sunroof, which extends over the rear seats.

As we are talking refinement, there is also LED cabin lighting which comes in different soft colour tones ranging from green and blue, to yellow, red or violet.

I’m not sure how much that helps, but if you choose the right colour on some it presumably has the same effect as mood music.

The Koleos has an R-LINK 2 multimedia system from entry level. This connected tablet co-ordinates the majority of the vehicle’s functions such as infotainment, navigation, hands-free telephony, radio and driver aids.

Two screen formats are available — seven-inch landscape for the Dynamique S Nav or 8.7-inch portrait for Signature Nav — both integrated into the dashboard design. Four home pages with widgets allow quick access to the most used functions. Voice recognition can be used for navigation, telephone use, radio and other applications, plus the ability to have emails read aloud.

A GPS navigation display has 3D representation of buildings, to make finding a new destination even easier.

A premium Bose sound system is available as an option. Since 2008, Bose and Renault have worked together to design and fine-tune audio systems for their vehicles.

The Koleos comes in six versions. Buyers can choose from two drivetrains: 2WD or All-Mode 4x4-i and two diesel engines: 1.6-litre dCi 130 and 2.0-litre dCi 175 — the most powerful diesel in the Renault range.

Two gearboxes are offered, both engines can have a six-speed manual, or the Auto X-Tronic continuously variable transmission is available with the 2.0-litre dCi 175 model with four-wheel drive.