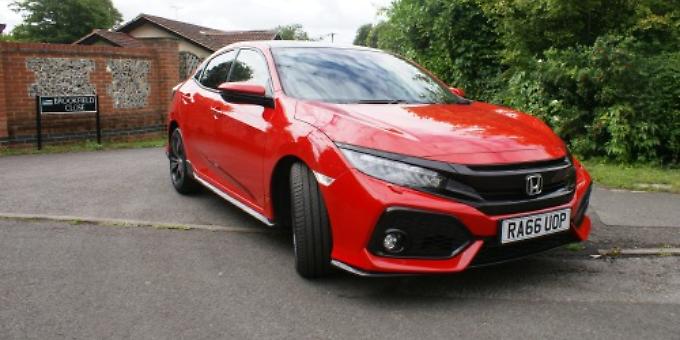 ON a mountain road on the beautiful, volcanic island of Madeira I first recall testing a Honda Civic.

We were staying at the famous Reid’s Hotel in Funchal with its evocative air of Englishness.

As we packed our picnic basket for our drive around the island, all seemed right with the world. Fast-forward just over two decades and the Honda Civic, first produced in the summer of 1972, is still with us.

But as you would expect the 2017 Honda Civic – the tenth generation of this model – I have been driving this week is very different from the one I drove in Madeira in the mid-Nineties.

Honda’s marketing slogan for the Civic is “dare to be different”. And I have to say my overall impression of driving a Honda – any Honda – is that it is different to other cars.

Every car manufacturer has a strong company culture that is long established and Honda is no exception.

Honda’s modus operandi leans towards conservatism in all things and this is borne out by its solid record for reliability. And yet this all-new Civic I have been driving was also of a stylish and head-turning design.

Perhaps finally Honda has got the message that you need to create a real excitement around a car to get it noticed not just for its reliability.

There are signs Honda is aware of this. Indeed, a leading designer involved in the latest Civic “project” was unequivocal.

So if with this latest generation, the carmaker can capitalise on the Civic’s “charismatic” appeal, this will add to its significant reputation for reliability.

In 2013, for instance, Honda was again named the most reliable car manufacturer in the annual What Car? and Warranty Direct reliability survey.

Honda had taken the title for an unprecedented eight years in a row, further reinforcing its reputation for building good cars. But it came as no surprise to me that this time around I felt a little strange when I first sat behind the wheel of the test car, the Honda Civic 1.5 VTEC Sport Plus.

Strange because driving a Honda these days feels like driving no other car. After a while, say a couple of days at the wheel, you begin to understand the thought process that has gone into its design and manufacture.

The driving experience of some cars these days can be quite banal. Nothing reaches the driver except the functional. In the old days we would have called this not being “involved” with the car. For some motorists never being involved is fine.

But if you like cars and driving then there has to be a certain amount of driver involvement. Otherwise you might as well get the train.

The more I drove the Honda Civic the more I liked it. What seemed like its quirky ways became the norm as the miles piled up.

It helped that this was the Sport Plus model with manual gearchange and more power. There is an eco mode – where the engine’s performance is checked in the interests of economy – and this works well in built up areas.

However, once you cut loose in this Civic Sport Plus it fairly rips along. Which is not bad from a relatively small 1.5-litre engine. There is a choice of two turbo-charged engines. In line with the current trend towards smaller, more efficient powertrains, the two new petrol engines are a 1.0 litre three-cylinder and a more powerful 1.5 litre four cylinder.

I would recommend the latter engine if you want sporty performance to match your new Honda Civic’s handsome design lines.

Also, this Sport Plus comes with a rear duel central exhaust, which, if you are into such things, adds to the “look”. This Civic is also a five-door sports hatchback so there is plenty of room for access for passengers without having to clamber around front seats.

The Civic is a core model for Honda in Europe and has been at the heart of the brand’s sales and manufacturing heritage.

The 2017 Civic has been engineered from the ground up with a lightweight, highly rigid bodyshell, which complements the lower centre of gravity. There is also a new suspension system that helps the driving experience. The new wider, longer platform results in more interior space. The entirely new interior features an uncluttered layout with new technologies.

The seating position on the new Civic is a “major change”, sited lower to give the driver “a greater feeling of connection with the car”.

Honda says this greatly improves visibility to the front of the car. The second generation of Honda’s infotainment and connectivity system incorporates Apple CarPlay and Android Auto integration. Also available is Honda Sensing, which incorporates advanced safety and driver-assistive technologies available across the range.

The new Civic will be built in Europe at Honda’s UK manufacturing facility in Swindon, be available in seven exterior paint finishes, and buyers of the 1.5 litre VTEC Turbo engine will be able to opt for either “Sport”, “Sport Plus” or “Prestige” grades, each of which feature exclusive exterior finishing touches.

The Sport and Sport Plus grades have more pronounced front and rear spoilers, side skirt garnish and exclusive 17-inch alloy wheels.

They also feature LED headlights and front fog lamps, while at the rear they are marked out by centre-mounted twin exhaust pipes with chrome finishers.