Born to run — and to be driven for driving's sake 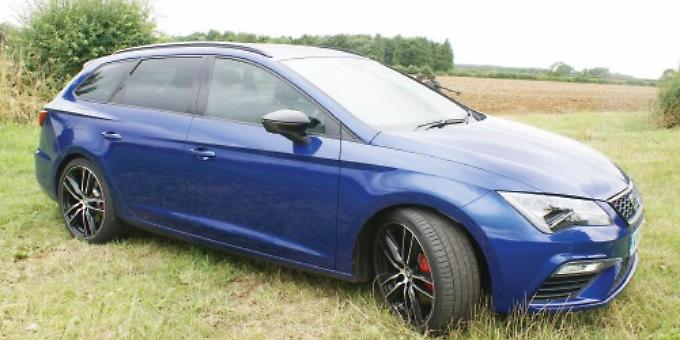 YOU may feel that your get up and go as a motorist has, so to speak, got up and gone.

Endless traffic queues, the commuter slog to work — the general wear and tear on any everyday motorist’s sense of wellbeing is comprehensive.

As a fillip to such chronic strain on the system, when the banality of driving today seems too much, I can recommend a spin in this week’s drive.

There are no half measures here. Whereas with some cars they seem content to potter along in the green zone of steady old speeds, the Seat Leon ST Cupra 300 is positively raring to go.

What with the car being an inanimate object, as I have noted on several occasions, surely it is up to the driver how fast he or she goes?

Well, you would have thought so. However, the nature of this little beast — the aforesaid Seat Leon ST Cupra 300, is that it appears to be born to run.

Not a lot of chance of that on today’s roads, you might think — and you would be right.

You own a car with manifest ability to go very fast at some risk today, because sooner or later you could be caught out. However, while your foot is on the pedal — and not some Google-ised or Apple-influenced driverless car of the future which will take that away from you — you must discipline yourself to drive within the limitations of yourself and the car you are in.

You might feel this is all academic, but this kind of blistering performance could get those tired old motoring juices flowing once again.

The voice of reason of course says what’s the point of such a car on today’s roads? At which point I go back to my opening paragraph.

If you drive this car with discipline and care you can indeed reignite your interest in motoring as a driver.

There may not be that many opportunities to drive it within the bounds of its capabilities, but then when and where is a good time on our crowded motorways today?

I made a trip just last week in this very car on a motorway that was liberally packed with vehicles — mainly, I reckoned, holiday traffic either coming or going.

Both sides of the motorway were literally clogged with vehicles — not slow moving, mind you, but at speed.

These are the kind of traffic conditions I have come to loathe: give me a Saturday night towards midnight when you are able to drive, not necessarily fast, but to enjoy motoring for motoring’s sake once again.

It’s not surprising that all these thoughts stem from some time spent with what is really a performance car.

Indeed, that’s exactly how former Seat president Jürgen Stackmann put it when the new Cupra was unveiled at the 2014 Geneva Motor Show.

Mr Stackmann said that “driving fun and great design comes with every Leon” but the new Cupra “displays Seat expertise in a whole new dimension”.

He said the new car was “a refined, high-performance car that combines its expressive dynamics with relaxed long-distance comfort and a compelling, high-quality feel”.

I agree with Mr Stackmann that paradoxically, simply because it is not a big luxury motorway cruiser, the Seat Leon ST Cupra 300 does offer a satisfying drive on long journeys.

This is down to the ease of passage that a car with these kinds of dynamics coupled to light power to weight ratio offers the driver.

It is also relatively economic — though that depends entirely on how you drive and you are probably not going to be hanging around.

But the official figures for the Leon ST Cupra 300 I have been driving are 40.4 mpg on the combined cycle and 161 g/km CO2 emissions.

It is unlikely that fuel economy would be uppermost in your mind if you buy this car.

By its own admission, Seat says the Leon ST is “as rakish as a family estate could possibly be”.

Well, there’s something antediluvian about being considered a bit of a rake in a digital age, which in my book is no bad thing.

Whatever one’s take on fast cars is, the Leon ST Cupra 300’s achievements as a performance car — plus the convenience of five doors and plenty of internal space and comfort — make it a dazzling prospect for those who would like to put some zest back into their motoring.