Škoda jokes can be safely 'skipped' 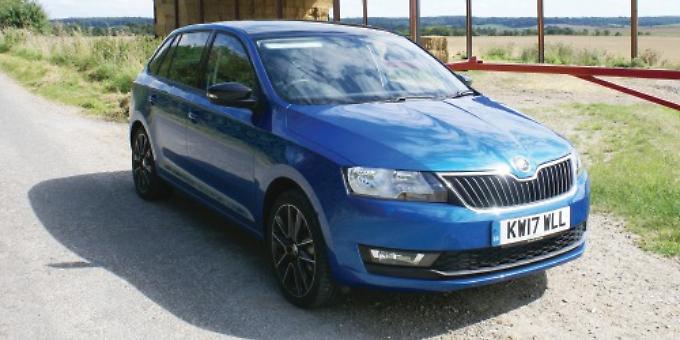 I AM so much a Škoda fan in its new era that it’s almost an embarrassment.

I say almost because one of the saving graces of this job is that you are allowed to have some misgivings about cars.

Not like in the old days — then there were manufacturers who would turn out some tosh and expect the motoring public to fall at their feet.

Today a car has to be good. It has to be well made and cleverly marketed to survive in a ruthlessly tough business.

In the past three years I have reviewed two other model variants of this week’s drive — the Škoda Rapid Spaceback SE Sport. Both earlier cars had the 1.6 TDI (diesel) engine.

I found the Rapid Spaceback GreenLine a “revelation” on fuel economy, returning a claimed 74.3mpg on the combined cycle. This greener version “sipped and sipped” fuel.

The test car arrived in Race Blue and performance-wise lived up to the implication of its ready-to-go livery. Fitted with 17in Savio alloy wheels in black, the car certainly looked the part.

As with other Škodas of recent years, I enjoyed driving this car as there was little wrong with its overall performance.

Acceleration was not electric but steady and sure if you drove the car by keeping an eye on the revs through each gear.

On this SE Sport version I also liked the handy-sized gear lever and positive movement “through the box”.

I’ve become a bit of a fan of the five-speed manual gearbox and have finally stopped “reaching” for a sixth gear on the motorway.

With these kind of modern diesel engines you do not need to thrash the car. The key is to build up your speed.

Thus there was a comfortable and indeed very competent cruising speed achievable on motorways.

Handling was also attractively light, which has been a feature of all new-era Škodas in my experience — with the exception of the new 4x4, the Kodiaq SUV, which surprisingly I found a tad heavy going.

The jury is still out on the Kodiaq for me as I want to try the Škoda Kodiaq Sportline, which I hope will display a lighter sense of being.

The test Rapid Spaceback was fitted with sport seats, but I would have liked to have seen more standard feature controls on these seats, such as adjustable lumbar support.

You also need heated seats in this Sport version to add to the comfort level and an auto setting for the lights.

It seems to me that with the Rapid Spaceback SE Sport, Škoda is improving all the time, and indeed the Czech car maker has finessed creature comforts in the cabin.

Back in February, Škoda announced that it was “enhancing” the Rapid and Rapid Spaceback with “numerous innovations”.

These are in my experience marvellous petrol engines and well worth checking out, both for satisfying performance and excellent economy.

With both petrol and diesel engines backed up into a corner for governmental health reasons, these low-emission, three-cylinder engines have to be an attractive proposition for present car buyers.

Meanwhile, the music and navigation systems of the Rapid and Rapid Spaceback are based on second-generation modular infotainment kit.

Features such as the Škoda surround system, Bluetooth hands-free kit and an Apple-compatible USB port come as standard or are available as options.

The smartphone interface SmartLink+, which supports Apple CarPlay, Android Auto, MirrorLinkTM and SmartGate standards, can also be used with the Rapid and Rapid Spaceback display.

I’m glad to say Škoda continues to thrive. The Czech brand recorded 585,000 deliveries to customers worldwide in the first six months of 2017 — thus surpassing last year’s record result by 2.8 per cent (569,400 vehicles in January to June 2016).

“Having delivered well over half a million cars, we have achieved the strongest half-year in Škoda's history,” said Škoda CEO Bernhard Maier.

Well, I’m still a big Škoda fan and so, it appears, are a lot of other people.

Why wouldn’t you champion any brand that has turned itself around in such dramatic fashion over the past two decades and proved a success?

Price of test car, including VAT and options fitted: £19,920