Targa-style MX-5 offers the best of both worlds 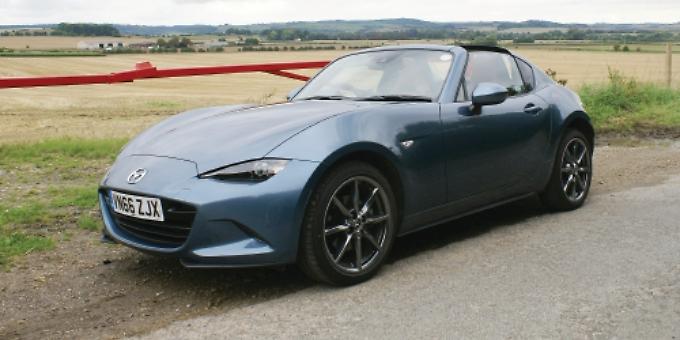 THE Japanese, by all accounts — though I am no connoisseur — are dab hands at making whisky and have been for some time now.

Where the Scots first produced a wee dram way back in 1494, the Japanese first commercially produced whisky — in the style of Scotch whisky — some four centuries later in 1924.

In car production, too, the Japanese showed their genius for reinvention by producing a world-class sports car decades after the British first came up with the concept.

There were early pioneers of sports car manufacture such as Riley and the glorious Alvis, but MG introduced its first bona fide sports car in 1923.

There can be no other name in car manufacturing history that epitomises the British sports car more than the MG (which has alas gone the way of all things, it seems, and is naturally now owned by the Chinese).

But it was Mazda, which began life in Hiroshima, Japan, in 1920 that in the Eighties came up with a design of pure genius that reimagined the sports car for a modern age.

This was the Mazda MX-5. This lightweight two-seater roadster with a front-engine, rear-wheel-drive layout made its debut in 1989 at the Chicago Auto Show.

It was an immediate hit because, by an inspired re-invention of the essential elements of the British sports car, Mazda designers produced an instant classic. This week I have been driving the fourth generation of that car, but with an added feature that I found very appealing.

The MX-5 up until this point has been a roadster — that is, a straightforward two-seater soft-top convertible.

Towards the end of last year, a new MX-5 RF (Retractable Fastback) model was announced.

This MX-5 RF has been this week’s drive and it demonstrated all the appeal of old-time sports car driving in a modern environment.

The MX-5 RF features a rigid roof and buttresses that give the silhouette a more coupé-like appearance than the soft-top convertible.

The top panel of the roof folds back, leaving the buttresses in place, similar to a Targa top.

The Targa top is a semi-convertible car body style with a removable roof section and a full-width roll bar behind the seats that was first used on the 1966 Porsche 911 Targa.

While I love the freedom of a soft-top convertible — the best and most satisfying way of driving any car — the retractable top MX-5 is perhaps a more sophisticated drive than your pukka convertible.

That may not be to everyone’s taste — after all, what this little car is all about is authenticity. It brilliantly captures a bygone age and ever so gently brings the
MX-5 into the 21st century and makes this kind of true sports car experience available to a whole new generation of drivers.

The great thing is it will not break the bank — that is, in the way that the majority of today’s sports cars do.

For those with deeper pockets who like the idea of owning a nippy sports model, they might indulge themselves by owning the MX-5 as a second car (as is often the case).

In the case of the MX-5 RF, a comparatively small number of buyers will benefit.

The all-new Mazda MX-5 RF went on sale in the UK in March of this year with a limited run of just 500 cars.

Designed to offer “a new dimension of open-top driving fun”, this “fastback” styling certainly attracted a lot of attention, especially from previous or present MX-5 owners.

As with the MX-5 convertible, all manual models powered by the 2.0-litre 160ps engine feature a limited slip differential and 17-inch wheels, while Sport Nav manual models have features such as Bilstein dampers and strut brace that improve and enhance the MX-5’s road handling.

With the introduction of the £27,095 Sport Nav Auto, the current generation of MX-5 is offered with an automatic gearbox for the first time in the UK.

Available in both SE-L Nav and Sport Nav trim, RFs powered by the 1.5-litre 131ps engine went on sale in May.

Suspension and electric power steering have been tuned for the MX-5 RF and in addition a sound-absorbing headliner used in roof panels combines with insulation around the rear wheel housings to deliver a quieter cabin when the roof is closed.

The latest generation of the MX-5 appeared at the October 2014 Paris Motor Show, and at the November 2014 Los Angeles Auto Show. On March 24 last year the MX-5 was awarded World Car of the Year and the World Car Design of the Year at the New York Auto Show.

The interior of the MX-5 RF model is almost the same as the soft top, with the same media screen, seats, steering wheel and switchgear.

“With the all-new Mazda MX-5 RF we freed ourselves from traditional ways of thinking and took on fresh challenges in order to create something new,” says Mazda’s Nobuhiro Yamamoto. “Our aim was a convertible sports car with gorgeous fastback lines when the roof is closed and an exhilarating open-air feeling when open.”

That comment just about sums up the great appeal of the Mazda MX-5 RF.

Available in a choice of seven colours

Roof opens and closes in just 13 seconds, even when moving at speeds up to six miles per hour

For the first time in this generation of MX-5, there is the option of an automatic gearbox — matched to the 2.0-litre 160ps Sport Nav