'Autonomous' lorries could see traditional ones parked for good 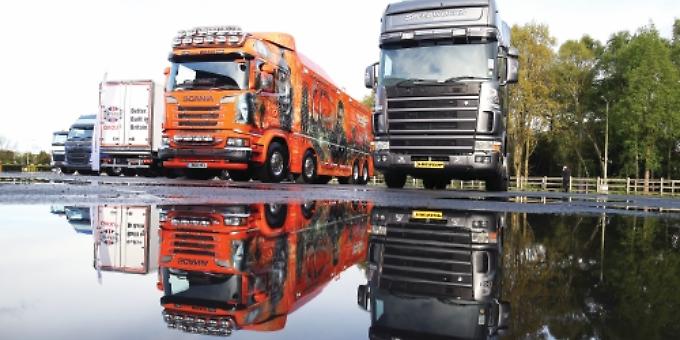 NOW here’s a thought: “Autonomous things are expected to proliferate in the coming decade, with home robotics and the autonomous car as some of the main drivers.”

I love that term “Autonomous things”. However, I’m sure with no pun intended, our old friend Wikipedia came up with the above quote while describing exactly what makes a robot tick.

Naturally this included the autonomous car and this week another “autonomous thing” related to motoring raised its rather ugly head in the news.

It must have sent shivers down the spines of Britain’s motorists because not only are they expected to cope with driverless cars in future but something possibly more sinister.

Our blessed government, probably with not much better to do during the so-called silly season, came up with the following: small convoys of “partially self-driving lorries” will be tried out on major British roads by the end of next year.

Yes, shock horror, indeed. The BBC reported that “a contract has been awarded to the Transport Research Laboratory (TRL) to carry out the tests of vehicle platoons”.

Well you have to admit it is the kind of crazy news that any self-respecting government would want to get out of the way when everyone is away on holiday. The plan is that up to three lorries will travel in formation, with acceleration and braking controlled by the lead vehicle.

At least the head of the AA was not on his holidays — he was reported as saying that platoons raised safety concerns. I’ll say: it’s bad enough now if you travel on the A34 where lorries seem to proliferate like frogspawn and you regularly encounter two, three or four or more lorries in procession.

Imagine encountering these proposed platoons, where the lead vehicle will be “controlled by a human driver and will communicate with the rest of the convoy wirelessly”.

Is this a new take on the old CB radio camaraderie between truck drivers? Actually, our platoon leader in this scenario would basically be talking to himself.

But there would be “wireless” instructions to following vehicles to accelerate and brake by the lead vehicle, allowing the lorries to drive closer together than they could with human drivers.

Oh, I don’t know about that either. Have you seen how close together some lorry drivers travel?

I remember once being on a major road (not the autostrada) in the dead of night between Florence and Milan, travelling at snail’s pace, behind what must have been eight lorries in a convoy.

The reality of that situation was that you might have passed them in a couple of days.

Of course the TRL is serious in its research and work and should be applauded for this, but the idea of this happening in the UK is what has I think shocked many drivers.

But Rob Wallis, chief executive of TRL said: “The UK has an unprecedented opportunity to lead the world in trialling connected vehicle platoons in a real-world environment. TRL and its consortium of leading international partners have the practical and technical knowledge gained from previous projects to understand what is required to put a connected vehicle platoon on to UK roads safely. The team are now taking that expertise and uniquely applying it within live traffic operations.”

I have to say that one of the most laughable statements of this particular truckers’ story came from transport minister Paul Maynard, who, possibly unwisely, played the environmental card.

“Lorries driving close together could reduce air resistance for the following vehicles, as the front lorry pushes air out of the way.”

This could lead to fuel efficiency savings for haulage companies, which the minister “hopes will be passed on to consumers”.

Really? So there is actually some “green” benefit in all this? As my old dad used to say: “Pull the other one!”

The TRL is to trial the technology on test tracks, but these trials are expected to move to major roads by the end of 2018.

As Jason Wakeford, director of campaigns for Brake, the road safety charity, said: “This rigorous trial is needed to prove whether this technology really can provide the safety and environmental benefits which are claimed.”

This is an idea that would go down a storm on Australia’s Highway 1 network of highways that circumnavigate the country, joining all mainland state capitals.

With a total length of approximately 9,000 miles it is among the longest national highways in the world.